Peer Gynt: The Dangers of “Being Yourself”

“Just be yourself.” Now, who can disagree with that? However, Henrik Ibsen, fabled father of modern drama, disputed the wisdom of “being yourself” as far back as 1867 in Peer Gynt, especially if the man “being himself” actually has no self. Today, as we watch the GOP—a party fabled for its exaltation of rugged macho individualism—in disarray, Ibsen’s allegorical verse play may be more urgent than we think. (Not to mention another crisis in American masculinity: steroids.) 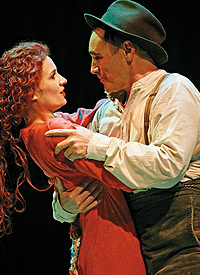 Bly notes that in the play, which predated Sigmund Freud by 30 years, Ibsen focused on a kind of man who would become “very powerful in the 20th Century: a person who is a mother’s boy with no father influence at all. And the result of that is simply someone who does what he wants. He doesn’t keep any of his obligations to anyone he loves or is with. It doesn’t make any difference. He keeps abandoning everybody.”

When Bly first examined the play, he thought the notion of being yourself was a good idea: “Be true to yourself. Be yourself. But as you go on, it gets more and more ominous in its implications. I do think it’s a Republican idea. [He laughs.]” Bly clearly sees Peer Gynt’s troll characters as exponents of that idea, with juicy digs that you won’t find meals-on-wheels or national health insurance in troll land, but you can read the Troll Street Journal.

Indeed, the marvelous Mark Rylance as Peer seems to channel our own “mama’s boy” President. Those who’ve read of George W. Bush’s formative years (Kitty Kelly’s Family; Justin Frank, MD’s Bush on the Couch) know the domineering influence of his mother, Barbara Bush. Bringing to mind his various job failures, both before and after the drug rehab he never finished, it might be paralleled with Peer’s various exploits. Among the masks Rylance as Peer dons for these exploits are a Yankee capitalist who parts ways with his European counterparts on an adventure in Turkey, and a wannabe demagogue seduced and robbed by Arab women.

Rylance, however, thinks of Peer in terms of Great Britain, where he served as Artistic Director of Shakespeare’s Globe Theatre for a decade, sharing, “In our country, [Tory Prime Minister] Mrs. Thatcher was famous and shocked everyone in the ’80s when she said there is no such thing as society—there’s just the individual. And this began a terrible period in English history, which we’re still carrying on. Really self-seeking. The idea that you’ve got to be tough. You’ve got to be able to downsize, and fight for your own company or your own individual success, regardless of other people.”

Bly observes of Peer Gynt, “It tries to point out that there’s nothing you can hold to in this whole idea of being yourself. Anything is possible. Any crime is possible.”

And this being Ibsen, a white male feminist icon, what about the women?

Dramaturg Carla Steen explains that women tend to relate to Peer in one of three ways: nagging mother, temptress, “and the constant Solveig [Miriam Silverman], whose love redeems Peer. While Peer is too self-centered to have a real relationship with any of the women he meets, and, in Act Four, he attributes his success in the world to his never having married, it’s only through the patience and steadfastness of Solveig—who carries both her own and his mother’s love for him—that Peer can finally say he has existed. Solveig can be a difficult role for a contemporary audience if taken in realistic terms. She essentially spends her whole life in a mountain hut waiting for the prodigal Peer to return.”

Rylance comments, “In the mythical level of the play, she’s some part of ourselves that does wait for us. That’s constant. An image of the soul, perhaps, waiting for us, and still loving us, despite all our childish kinds of attempts to take on identity, and be this and be that.”