On The Runway Section

“I’ve never considered myself in the fashion scene. I simply love graphics,” Paul Jacober states. Miami Beach Cool may be known through the styles of its hottest new designer. Jacober, a man who claims he’s still trying to figure out the fashion world, has created some of the sexiest new T-shirts hitting the market. And it’s just the start. 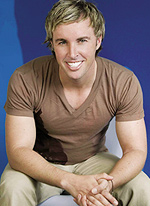 Jacober’s latest line, Never Mind the Roses, his “salute to Great Britain,” stays away from the frills of other clothing lines, and aims for the sexy, sophisticated look that spans daytime casual to nighttime chic. Don’t expect to see this look anywhere else.

According to Jacober, “I try and experiment with ideas, and do things I don’t see. If I have an idea, and then see it produced in a similar manner, I lose interest immediately.”

Jacober does cool naturally. Staying ahead of the curve is just the beginning.

“I lived here and moved here at a time when South Beach was very effortless cool—pre-P Diddy,” Jacober remarks, throwing in some humor. The man just knows cool.

Drawing his inspiration from “the buildings here on the beach and Bruce Weber’s photos of Davie, Florida, all of which are supercool and underappreciated,” Jacober does more than design some of the most desirable T-shirts. He makes them pleasing to feel against your skin on a hot night out. Made from 100 percent Pima cotton, a fabric that’s amazingly soft to the touch, they’re comfortable—like T-shirts were meant to be.

Educated at Pepperdine University in Malibu, California, Jacober traveled abroad, living in London, and later in Los Angeles, New York, and Miami, while working with Vibe Magazine, Museums New York Magazine, and the School of Visual Arts in Manhattan. He started Jacober & Associates in 2000. 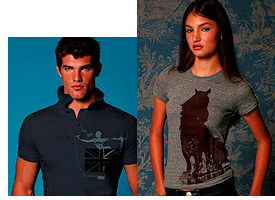 Jacober has been quoted as saying, “My designs work perfectly on garments. Creating cool attire is just a natural extension of my specialty: great design.”

Being a man who does what he wants has worked for Jacober. Eight years later, he’s going strong with some of the most innovative T-shirts worn on the beaches and in clubs.

“I wanted to do something less client-driven, and do things and take chances that I personally wanted to explore,” Jacober shares.

As for what the future holds for this rising Miami designer, don’t ask him: “I can’t share my secrets,” Jacober demurs—but expect nothing less than sexy cool.