A quarter-century ago, Patrick Scully created an opportunity at St. Stephen’s Church Gym in South Minneapolis by giving various artists a chance to try out new performance work before an audience without an audition. After the first, which he thought would be just a one-time event, the demand to keep it going skyrocketed, and Patrick’s Cabaret was born—a safe space where you could express what you wanted, however awkward or transgressive. On June 11, Patrick’s celebrates 25 years, featuring past performers spanning that time range.

Facilities Manager Marc Bautch remembers, “Back in the 1980s, being openly queer, a person of color, having a disability, or just being inexperienced meant that you couldn’t find a stage to perform on. Patrick provided that space. We still have a similar format for our shows.” 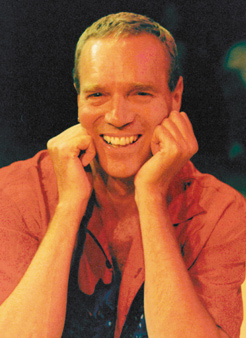 John Killacky, former Walker Art Center Performing Arts Curator, who often collaborated with Scully, reminisces, “Each visit to the early days of his cabaret, I would learn about yet another local artist I did not know—exactly what an alternative space is supposed to do! His own work: AIDS-related elegies—fierce, strident, and mournful—and his very tall gay self-improvising with a much shorter, straight Chris Aiken.

“He supported a rainbow cornucopia of young and old, established and emerging artists. Deeply local, his cabaret was also global—hosting, with Intermedia Arts, Isaac Julien’s performative version of Looking for Langston, and working with the Walker to host Ron Athey’s Four Scenes in a Harsh Life, which would become another flashpoint for National Endowment of the Arts funding.”

In 1994, Athey’s performance fueled right-wing attacks on the NEA. From Star Tribune art critic Mary Abbe to neocon media star Rush Limbaugh to Republican US Senator Jesse Helms, the cabaret was on the puritanical hot seat. Vicious distortions ensued that falsely claimed AIDS-tainted blood was dripping from a clothesline.

As current Executive Director Amy Hero Jones puts it, “We still strive to create a theater space in which anyone and everyone feels accepted.”