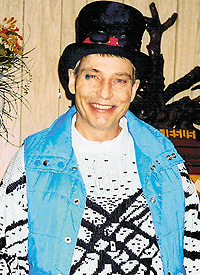 A Tribute by Jason Mooney
Dean Hardy was known as Deano to his friends and family. Diagnosed with HIV 12 years ago, he was always optimistic. I don’t remember a day when he wasn’t chatting up a storm and laughing. I can recall when he first received the news about being positive. The doctors told him he had three months to live, and to enjoy the little time left.

In those days, with this type of diagnosis, everyone sold their life insurance policies, and tried to whoop up the little time they had left. Dean entered several University of Minnesota experimental programs. Back then, when AZT was one of the only pharmaceutical medications, the concept of HIV cocktails was just beginning to be developed and tested.

At the time of his passing, Dean’s viral load was undetectable. But looking at his frail body, it showed a different story. The years of strong HIV medications had made his bones as brittle as a 97-year-old woman. His liver and kidneys were not able to perform their proper functions.

I wish our youth today would realize that HIV may appear to be “manageable,” but the long-term toll on the body is gruesome.

Over the years, Dean was the recipient of many social services assisting those living with HIV. Although I can’t remember the year, my Uncle Deano asked if I would walk with him in the Minnesota AIDS Walk. At the time, I didn’t realize how important it was to him to have someone from his family support him in the walk. The first two years I was asked to accompany my Uncle, I couldn’t attend—partially because of the stigma of the word “AIDS,” and because at that time I was afraid I would be “outed” by walking. When the third year came around, I had an opportunity to volunteer, and I asked my Uncle if he would like to come out and be a route marshal. When I told him he could get an “OBEY ME” T-shirt, he was excited to volunteer instead of walking.

Dean started my involvement with the Minnesota AIDS Project, The Aliveness Project, and Camp Heartland. I’ve been on the steering committee for the Minnesota AIDS Walk for many years. I also sit on the Community Action Board for PrideAlive. I’m now one of the managers for the Saloon. Dean made my conviction of helping prevent HIV and supporting the gay community stronger, and he’s my guiding light.

Dean will be missed, but he always was been one to move forward while laughing.