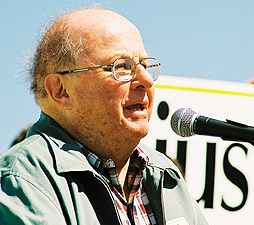 Born June 24, 1937, Spear received his doctorate degree from Yale University. He was Professor of History at the University of Minnesota for three-and-a-half decades until his retirement in 2000.

US Representative Tammy Baldwin of Wisconsin said, “In Senator Allan Spear’s passing, I have lost a mentor. Allan encouraged countless individuals to enter the political arena, and use their talents to confront the challenges of the day. He was particularly inspirational to those of us who, like Allan, are a part of the LGBT community. Allan was among the first in our nation’s history to come out in office, blazing a path that many others could follow.”

Spear is survived by his life partner of many years, Junjiro Tsuji.