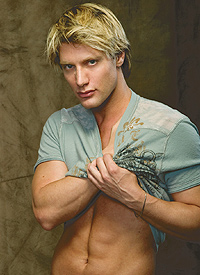 Asking this gay boy not to make snap judgments based solely on physical appearance is like asking our beloved President not to use faulty English. It’s not something I mean to do—it just kind of happens. It may be harsh, but I like the view from the height of the pedestal it puts me on.

I first met Oryon last year on the cover of Lavender. He was bare-chested, and not much of a talker. Yet, looking at his bleached blond hair and chiseled abs, I felt like I already knew him. This boy more than likely never had done a day’s work in his life—he was sure to be pop progeny or heir to an international fortune. I imagined his personality to be about as deep as the cover photo.

Born in Wisconsin, this celebrity probably would have adopted a Laguna Beach accent with a surfer drawl somewhere along the line. As a native Californian, nothing irks me more than an improperly timed “Dude….” His conversational skills potentially would be sub par—words with six or more letters would elude him. Cold? Yes. Shallow? Absolutely.

Then, late one recent Thursday afternoon, I called the teen pop sensation known as Oryon, the very name a seemingly cheap attempt at stardom. I felt sorry for myself, imagining the difficulty I would have trying to stretch 15 minutes of “Like, totally!” and “That’s hot!” into a meaningful read. The phone rang, as I practiced my best Chelsea Lately voice.

He answered. We spoke. I cried.

Within the first few sentences, the artist totally had discredited all my preconceived notions. Instead of ringing through a hollow head, my words were absorbed, processed, and volleyed back. He matched wit with wit, twisted humor with thoughtful response. It was at this point that I died a little on the inside. How truly unfair that someone can be blessed with model good looks as well as the ability to form sentences.

The depth in Oryon’s voice was clear, his conviction unmistakable. Obviously, he had had many conversations with people like me, fans who selfishly wanted to feel some form of superiority. The nervousness in my voice became apparent.

It was increasingly evident that he was not the Oryon I had invented, but rather, a real person brimming with social understanding. He evinced the depth of soul of one many years his senior. He was grounded. He was well-spoken. I felt he could have lived many lives in the time it took me to pick out my day’s wardrobe. This is a man who knows what he wants—and how to achieve it. I envied his motivation…among other things.

We began talking. I wanted to know it all. No holds barred. His success. The total package.

“If you’re not willing to invest in yourself,” Oryon mused, his tone jovial and spirited, “you can’t expect anyone else to. Realize that no one can make you a star but you.”

Too true. Oryon is the embodiment of a self-made star. His talent is matched only by his ability to expect nothing but the best from himself. He spoke at length of the many exhausting hours he spent building his career, exploring every opportunity to its fullest. “Driven” seems an understatement.

This singer has toured with big names like the Backstreet Boys and BBMak, and rubbed elbows with the likes of Christina Aguilera and Justin Timberlake—quite an achievement for someone in his 20s.

Oryon’s passion is apparent in his voice. Gone is the darkness and depression from his past, replaced with a secure, hopeful individual. He talked about the recent passing of his father, mentioning that it had given him new perspective, and perhaps a true appreciation of his accomplishments. He recognizes his own mortality.

“The deep answer would be that I thought I would be dead a year ago,” Oryon confided. “I wasn’t planning for down the line. I’ve come full circle.”

Despite his devastating loss, the musician remains determined. He recently signed a three-record contract with AGR/ Universal in Germany. He pointed out with a great deal of pride the completion of his first full album, due to drop on September 12. Once again, he is performing…and producing.

“People are asking me to produce their songs,” Oryon explained. “They’re flying me all over the country.”

Back to his nonstop lifestyle: Oryon is set to perform at the upcoming Splash Bash II with the Village People. He is working on booking several more appearances abroad. When asked about his popularity in Europe versus back home, he stated that he is comfortable being less-known here, if only for the moment.

This attitude stuck me as the embodiment of this artist’s personality: He enjoys his celebrity, but also his anonymity. It allows him to be himself. As a self-proclaimed workaholic, he has the motivation and means to make himself a household name, but also the humility not to let success define him.

Despite his demanding performance docket, the star still maintains his own talent agency. Arquette and Associates boasts an impressive list of multinational contracts, with models in every major fashion hotspot, yet he continues to scout for the next big talent. He willingly dispenses information and hope for anyone seeking success and notoriety. It is this willingness to help and nurture talent with a personal touch that is unique.

When asked what budding performers ought to do to kick-start their careers, Oryon gave the same advice that has worked so well for him: “Have a press kit ready to go. Find ways to get yourself out there. I sent my photos all over hoping that something would hit.”

This celebrity stressed again that stars don’t just happen, but are made with blood, sweat, and tears. And while Oryon always has his eyes open for others, it is up to the individual to make it happen.

Though his talent agency takes up a great deal of his time, the artist has several other works in progress. He presently is filming a television show entitled Straight 2 My Heart with the Real World’s Davis Mallory. The show promises to be a wild mix of reality show drama and dating game dysfunction.

After relating all of his success and lofty expectations, Oryon paused, and seemed to float back down to earth. Then, he shared something I wouldn’t have expected: He wants to fall in love, to have a family, a child. Cognizant of the difficulties of single parents, he noted that the gay community often is stigmatized because of its wish to have children. He referenced his own desire perhaps to be a single parent. Difficulty doesn’t seem to faze him. Maybe he will become the next pop-daddy, clad with Prada diaper bag and Ferrari stroller.

By the end of our conversation, Oryon had won me over. The nervousness we both felt initially had faded. I wasn’t talking to a pop icon, but instead, it seemed, to an old friend. Though we hadn’t met, I felt like we could have. I went to the computer, and reminisced over my conversation with a cover boy. I clicked on his Web site, and as his Rockstar video popped onto the screen, Europop ear-candy erupted into the room. I leaned back, and absorbed the sounds, mesmerized by Oryon’s ability to possess both blond hair and a genuine personality.