John Kander and Fred Ebb’s Cabaret looms as an emblematic work on queerness and the specter of fascism. The classic 1972 film is said to have been bolder in its queer representations than the original 1966 Broadway production. But, since ’72, the queerness has been fleshed out more deliberately in most major stage productions. Sam Mendes’s revival a decade ago pulsed with bleak sociopolitical undercurrents and a sensibility that beckoned gay experience in concentration camps. 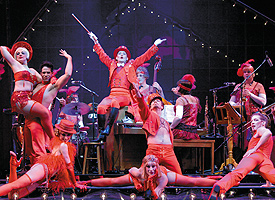 However, the new revival at the Ordway has replaced Mendes’s “heroin chic” with “razzle-dazzle.” Indeed, Weimar Berlin had its dives, but also snazzy clubs comparable to Paris’s Folies Bergère and New York’s Ziegfeld Follies.

Nick Garrison plays Cabaret’s fabled Emcee, who comments, Brechtian-style, on the play itself. Garrison told director Bill Berry that he could not play a symbol, but could play a human being. So, he researched actual emcees and conférenciers.

Garrison calls Emcee “an angel of history. He kind of makes the show happen, which is different, I think, than in other productions where he seems to be more coldhearted, and maybe even a symbol of complicity with the rise of the Nazis. But I see the character as unsympathetic to the Nazis, and yet having to go along with what was happening, the way much of Germany did—and representing a lot of what happened to a lot of Germans in having to toe the line, and keep going just to survive. A ton of cabaret performers were actually put in concentration camps, and stayed alive by performing—in the camps.”

Ordway Programming Director James Rocco observes that Weimar Berlin, a Mecca for 1920s and ’30s Bohemians, “saw the rise of early versions of the liberation movements we would not see again until the 1960s and ’70s: women’s liberation, gay liberation, and sexual liberation of all sorts.”

In fact, the “body culture” influences Ordway’s take on the chilling anthem “Tomorrow Belongs to Me.” It crystallizes the fascism that Clifford (Louis Hobson) ultimately realizes has engulfed Germany. Also, his sexual orientation in the stage version, unlike the film, is not as clearly homo.

Regarding Clifford’s relationship with enigmatic Ernst (Tyson Forbes), the two actors have focused on, in Hobson words, “trying to make their friendship as deep as possible. There are a few moments interspersed in the play. I think [Clifford is] enamored of Ernst, and maybe, perhaps, is interested. But I don’t know if Clifford’s sexuality is that thought out—that purposeful. I think it’s much more latent.”

Indeed, Clifford is repulsed when awakened to Ernst’s Nazi sympathies, which may suggest homoeroticism at play beneath Nazism’s ubermasculinity. It’s something Lothar Machtan probes in The Hidden Hitler, and something undulating within Cabaret—that natural connection between homoeroticism and intense right-wing macho militarism. Hence, war’s unspoken contribution to the expansion of homosexuality.