Now in its 23rd year, the M-SP International Film Fest’s big queer flick this year is the Ron Davis-Stewart Halpern film Pageant, an inside look at the Miss Gay America Pageant, which first screened March 24. Though more drag or trans than gay, hormones or surgical body enhancements are no-no’s for contestants. The film also looks at family members and friends of the contestants.Other GLBT-themed screenings are The World Unseen, The Yacoubian Building, and The Edge of Heaven. 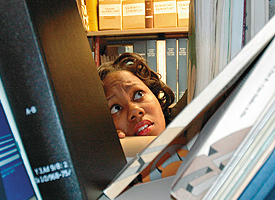 The University of Minnesota has the 1975 musical hit The Wiz speak to today’s college student. So, the Land of Oz has become Oz U! Ivory Doublette plays Dorothy, gay culture’s most beloved little girl.Director Dominic Taylor says, “Beyond entering a world that is racially different and more diverse than her home, Dorothy also encounters, in our production, a world that is more socially diverse as well. Having cast the show both color- and gender-blind, many characters that were written to be played by black actors are now being played by a wide assortment of races from a wide assortment of fields of study across the university. There are also multiple characters that were originally intended to be played by one gender being portrayed by the other as well. Despite the gender-blind casting, there was no need to change the character’s lines to reflect a hetero-normative atmosphere. If a character was originally male, and expressed his desire for women, the line stayed, despite the character now being female.”T. Mychael Rambo is assisting Taylor, and Sanford Moore directs the music.

What happens when a middle-aged, middle-income, straight couple is consumed in a financial hell? Urban Samurai’s gifted Resident Playwright, Aaron Christopher, feels his latest satire, American Apathy, resonates with the current economic crisis.Christopher cites “soaring oil prices, the weakening dollar, and surging unemployment. We’ve been encouraged to go out shopping to buy, buy, buy, in order to maintain ‘consumer confidence,’ and boost the economy. But these clear signs of recession are not a result of lack of spending, but, rather, an excess. The crash of the housing market is an excellent example of this. In our rush for a piece of the real estate pie, we built more houses than the market was demanding, and people bought houses they couldn’t afford, which set up a devastating wave of foreclosures. But this is not just an issue of restraint. This is a message that until you have it all, you never have enough.

When acclaimed choreographer Sean Curran travels outside his native New York, he’s struck by how much interest in same-sex partnering he encounters. On tour, he observes that many still are stunned by men lifting men, and women lifting women. His Men In Motion piece, a segment of Zenon Dance Company’s 25th Season show, indulges that with its athletic, robust take on male relationships.Curran relates that he’s interested in “machismo, one-upmanship, a friendly competitiveness, and also a sense of confrontation. But I didn’t want any clichés about men fighting because they’re men. So, what we end up with are danced conversations.”According to Curran, these conversations might be seen as father-son, brothers, buddies, or lovers. There’s physical contact, but it’s not necessarily homoerotic.Male soprano David Daniels accompanies with Handel arias.

Goodnight Desdemona (Good Morning Juliet)
Through Apr. 28
The Paul and Sheila Wellstone Center
179 E. Robie St., St. Paul(612) 721-1186
www.theatreunbound.com
Theatre Unbound has a flair for feminist comedy, so Goodnight Desdemona (Good Morning Juliet), by Ann-Marie MacDonald, is a wonderful choice. This 1988 gem follows the madcap literary theories of an English professor, Constance Ledbelly (Delta Rae Giordano).Director Genevieve Bennett enjoys how the play reimagines certain Shakespearean women “as more than love-struck ingenues, but rather, as a headstrong fighter and a sexy courageous woman, respectively. Othello and Romeo become the unwitting victims of their own mistakes, while the women guide Constance to self-discovery. MacDonald also plays with gender in the casting. The actress playing Desdemona also plays Mercutio. The actor playing Tybalt also plays Juliet’s nurse. The playwright takes it a step further when she has Romeo and Juliet don each other’s clothing in an effort to win the affections of Constance, a woman dressed as a man. The wild-goose-chase of mistaken identity leads to gay and straight encounters that are both poignant and hilarious.”