Suzy Messerole is a celebrated director of queer and feminist works. So, The Lady With All the Answers, a bioplay about Ann Landers (née Eppie Lederer), the most famous mainstream advice columnist ever, may seem uncharacteristic. 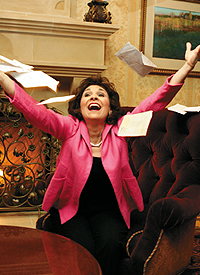 But Messerole points out, “In between doling out advice on marital relations, child-rearing, and the proper way to hang toilet paper, she was extremely courageous and progressive on several issues, including her staunch support of Planned Parenthood; vocal opposition to the Vietnam War; and opinion that homosexuals are born, not made, and everyone, especially parents, needed to just accept it. She was the first columnist to put the word ‘homosexual’ in print, and for years counseled gay and lesbian teens against committing suicide.”

This History Theatre solo production, penned by David Rambo, stars Cathy Fuller, who was superb as the homophobic mother in Sandbox’s 2007 staging of What Remains.

Roman poet-storyteller Ovid ranks with Greek playwright Euripides as Western antiquity’s foremost gay literary figure. Both men were exiled. Though not a dramatist, Ovid has his own place in theater history for influencing Shakespeare so profoundly. Ovid’s Metamorphoses also was adapted into a Tony-nominated Best Play by Mary Zimmerman.

Theatre Pro Rata director Carin Bratlie says, “It’s striking how very anthropomorphic the gods are in classic mythology. In Metamorphoses, there is very little difference between gods and humans. But the gods have this puppeteer quality in which they are constantly influencing the lives of humans, especially when it comes to matters of the heart. Since the reality of physics has very little sway when characters are turning into seabirds and trees, we have great opportunity to explore the simplicity of poetic storytelling as a way to create this magical world.”

Revolutionary playwright Bertolt Brecht’s Puntila and His Hired Man Matti spoofs the hypocrisy of the rich and powerful. Of course, arranged hetero marriage is part of that. Puntila, when drunk, is magnanimous and relatively open-minded. But when sober, he wants his daughter, Emily, married off and well-connected to a ridiculous, pretentious, name-dropping member of the diplomatic corps dubbed simply “The Attaché.” When drunk, Puntila can’t stand him.

Patrick Bailey, who plays The Attaché, notes that his character “has lots of polish, but he’s essentially broke, so he wants to marry Puntila’s daughter, so he can get his debts paid off.”

If you think arranged marriage is a thing of the past, go to Egypt, or listen to Republican radio commentator Dr. Laura Schlesinger, who thinks it’s a good idea.

Traditional hetero marriage’s unnatural legacy is critiqued in Cromulent Shakespeare’s excursion into Jane Austen with a stage adaptation of Sense and Sensibility.

Director Bethany Ford shares, “Jane Austen was a brilliant, often hilarious, satirist of social convention, particularly where it concerned courtship and marriage. In Sense and Sensibility, she takes a more sober look at women and marriage. Since marriage was the only way that a woman could achieve any kind of social status, and the only way she could live independently of her family without resorting to hard labor, the pressure to marry was very great. And love within the marriage was often a secondary consideration at best.”

Karen Sherman won a coveted Bessie Award last year, and now, you get a chance to see her piece cochoreographed with Morgan Thorsen titled Double Rainbow.

According to Sherman, “It’s actually pretty gay. We were commissioned to make it this past fall, and asked students if they wanted another chance to perform it for Queerographer’s Evening. We were inspired by partnerships—collaborative, artist/muse, and lover—John and Yoko especially. And an underhanded critique of marriage: gay and straight.”