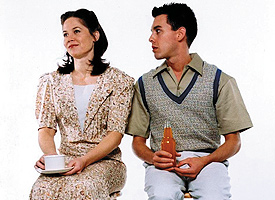 The classic film Summer of ’42 epitomizes heterosexual awakening. But is its new stage musical version something gay audiences can relate to?

Cade Bittner, who plays protagonist Hermie for Minneapolis Musical Theatre, says, “Absolutely, if not more so. For gay people, that discovery is, in most cases, amplified, because it’s not what we are habitually raised to feel or acknowledge. So, instead of falling into utter bliss, we add on deep feelings of confusion and fear. Hermie’s breakthrough is exactly that. It is truly an explosive reaction that he feels is so right, but also so terrifying for many reasons.”

Our automated society, where mechanization trumps human interaction, inspires Jeune Lune’s new satirical creation, Fishtank—further evidence that one of America’s top theaters is weighing in tough on political issues. For instance, in this show, security screeners strip people of both clothing and dignity. Fishtank also exemplifies the company’s signature physical comedy style that put it on the map in the ’80s. Its entertaining roots in European clowning, along with the slapstick of Jacques Tati and American silent film great Buster Keaton, are in evidence.

Alexandra Wailes and Erin McGovern are wonderful as a lesbian couple—one deaf, one not—who hazard a serious ethical issue in Love Person. It’s as natural and intimate a portrayal as any done on any local stage in recent years. It also provides food for thought about the use of the term “dyke.” Playwright Aditi Brennan Kapil plays with Sanskrit, English, ASL, and the Internet. This production also marks a splendid directorial return to Minneapolis of former Guthrie resident director Risa Brainin, who has been working in California. And Nayna Ramey’s impressionistic set is one of her best ever.

You surely have noticed that considering how long as the United States has been in Iraq, precious few plays or films about it have emerged. But then, it’s hard to think about all that death, misery, and guilt, isn’t it? Indeed, the most conservative numbers regarding Iraqis are 81,000 dead, 700,00 displaced, and hundreds of thousands maimed—and only limited amounts of drinkable water are available. But politicians of both parties at least are borrowing billions from overseas to give the illusion of addressing that ugliness. Yes, that’s you, too, Nancy Pelosi! It ain’t just about Republicans, girlfriend!

Bucking the apathy is Heather Raffo’s solo play at the Guthrie, 9 Parts of Desire. The gifted Kate Eifrig renders eight Iraqi characters and one American. Joel Sass, who recently directed and designed the Apartheid-era solo hit The Syringa Tree at Jungle, does both for this one, too.

Nothing’s more explosive a topic than pedophiles who kill their victims. Bryony Lavery’s Tony-nominated play, FROZEN, at Park Square, so confronts us.

Actor Terry Hempleman relates, “It’s the notion of being frozen. This guy is frozen, and can he become unfrozen? Can the mother of one of his victims become unfrozen from her grief and anger about that? And where does the abuse begin? Does it begin with my character abusing someone or with someone abusing my character?”

The subject matter certainly will repell many, as will the idea of forgiving heinous acts. But wrestling with this issue helps us wrap our minds and hearts around getting at its root causes. No, you won’t end pedophilia, any more than you’ll end rape, gay bashing, or terrorism. But in deconstructing it, you can prevent much of it.

What happens when Man in a Chair (Jonathan Crombie), a single, middle-aged guy into show tunes, imagines what a 1920s musical would look like as he listens to a recording of it? Imagination soars at the Ordway in this winner of five Tonys, The Drowsy Chaperone.

Ensemble player Kevin Crewell declares, “It’s not just a throwback musical, but it’s seen through the eyes of 2008, and that’s what makes it really different from Anything Goes or The Boyfriend.”

Crewell compares the title character, played by Nancy Opel, to “gay icons Judy Garland, Cher, and Bette Midler. The person who will say and do everything Man in Chair wants to say and do, but doesn’t have the courage to say and do—I think that’s at the heart of every single gay man on the planet.”