If you caught Sarah Agnew in lead roles last year in the Guthrie’s Major Barbara and The Home Place, you probably were quite impressed. But she has outdone herself with Pamela Gien’s one-woman play The Syringa Tree at the Jungle, in which she plays 22 different characters during the South African white-police-state era known as Apartheid. Though not a political statement per se, it’s a consummate vision, marvelously acted, of how government policy insinuates itself into the very fabric of ordinary daily life of children. Director-designer Joel Sass has the entire upstage area covered by what looks like aged earth-toned parchment. Through it and downstage emanates Barry Browning’s soulful lighting. The effect is that this solo piece has an epic, transcendent feel. 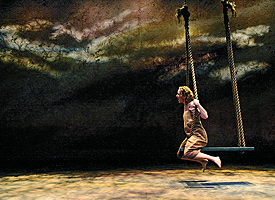 The Reigning Monarch of Camp Choreography, Myron Johnson, dances his first solo piece since 1999 with his own Ballet of the Dolls, a troupe renowned for its love for classic film. La Dolce Vita, Federico Fellini’s 1960 masterwork, is more of a springboard for new ideas for the Dolls performance, but you still will relish the music of Fellini’s unsurpassed composer, Nino Rota, best-known in the United States for his Godfather scores.

Johnson shares, “I feel a vibration under my feet while I am working with this Italian music. I haven’t felt that since the original Carmen. I never know what’s going to come out of me, but it seems very much about passion, sensuality, a strong sense of self and beauty, humor—and lots of pasta! I had an Italian man seduce me in Paris when I was a young man, and I was so flattered by his attention and his beauty, and in the end…he stole my passport. It was worth it.”

Theatre Latte Da and Minnesota Jewish Theatre join to present Alfred Uhry and Jason Robert Browne’s Tony-winning 1999 musical Parade at the History Theatre. It’s the tragic true story of Leo Frank, a Jew wrongly tried and sentenced to death in Georgia who was removed from death row only to be lynched by a mob. Parade is one of those truly great, seldom-produced musicals.

Director Peter Rothstein says Parade is “about the psychology of the South following the Civil War—a complicated look at racism in both the South and the North. It is also about a woman’s liberation, giving herself a voice in her work for justice.”

Dramaturg Stephanie Lein Walseth notes that each play in the Cycle “works to reanimate specific moments of a decade as they reveal the living legacy of slavery in the black American experience. The Piano Lesson, set in Pittsburgh’s Hill District in 1936, animates this legacy by incorporating implicit influences from the Harlem Renaissance, the Great Depression, and most importantly, the Great Migration of newly emancipated blacks from the South to the North.”

Lorraine Hansberry (1930-1965) looms as the most lauded African American female playwright. Because she loved women, she also had an innate understanding of gay oppression. She wrote one of the most fully fleshed-out gay characters in drama up to that time in her final play The Sign in Sidney Brustein’s Window (1964), five years after her Broadway smash A Raisin in the Sun.

Lynn Musgrave, who directs this Starting Gate Productions revival of Brustein—with Clarence Wethern as David Ragin, the gay-playwright character—relates, “I appreciate how balanced Lorraine Hanberry’s approach was. In David Ragin, she introduced us to the lifestyle without condemning or stereotyping. We have moments of comedy, when Sidney introduces him to her conservative older sister, Mavis; tragedy, when David reveals the story of his first love; triumph, as David celebrates his rave reviews; self-pity, with David’s reference to himself as a victim; and morality, with his refusal to sacrifice his ethics after an impassioned appeal from Sidney.”

Shadows emanates the intimate monlogues of gay photographer and performer William Yang. A third-generation Chinese-Australian, he writes “When I was about six years old, one of the kids at school called out to me, “Ching Chong Chinaman, Born in a jar, Christened in a teapot, Ha ha Ha.” I had no idea what he was talking about, but I knew from his expression he was being horrible. So I went home to my mother and I said, ‘Mum, I’m not Chinese, am I?’  And my mother looked at me very sternly and said, ‘Yes, you are.’ Her tone was hard and it shocked me. I knew in that instant that being Chinese was a terrible curse and I could not rely on my mother for help, or my brother, who was four years older, very much more experienced in the world. He chimed in “And you’d better get used to it!”

That gives you a sense of the roots of Yang’s sensitivity to being ‘the other’. From that vantage point Shadows looks at how ignorance causes suffering. For instance, changes within the Australian Aboriginal community are looked at and the internment of South Australia’s German communities during the World Wars is reflected on. Two predicaments you’re not likely to see in the American performance scene.

The 15th year of celebrating women’s films at the Walker has some juicy offerings. Older than America (Fri., Mar. 7, 7:30 pm) portrays a Catholic cover up of atrocities done against Native Americans. It’s directed by Gerorgina Lightning.
To honor International Women’s Day on Sat., Mar. 8 at 2 pm and 4 pm, you can catch a variety of short films by women from around the world and from right here in Minnesota.
Human trafficking is the central theme of It Happened Just Before. Austrian filmmaker Anja Salomonowitz uses a documentary approach of first person narratives. It plays Sun., Mar. 16, 2pm.
The Iraq occupation is central to Operation Filmmaker (Thurs., Mar. 20, 7pm). Director Nina Davenport intertwines the cultures of Iraq, Hollywood, and Prague. It also wrestles with power struggles between male and female.