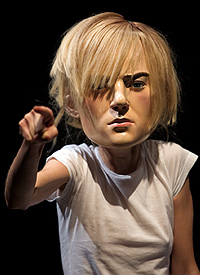 For years, feminist author Nor Hall (The Moon and the Virgin, SHE Captains) has urged Walker Art Center to host Romeo Castelluci, the controversial Italian theater artist with roots in punk and anarchism.

As a copresenter with the Walker of Castelluci’s Hey Girl!, Hall expects his piece, featuring two women and 40 men, to have, in her words, “something going on with what the Jungians used to call the anima—the eternal feminine in various guises that tend to alternately plague and save us.”

And at the Orpheum, check your stereotypes at the door, because the US tour of Lerner and Lowe’s My Fair Lady is not merely an “old chestnut.” Staged by Britain’s preeminent National Theatre, it wowed the West End, London’s equivalent of Broadway. No wonder: choreography by gay iconoclast Matthew Bourne (Swan Lake, Edward Scissorhands), plus Marni Nixon as Mrs. Higgins.

Corporate media’s oversimplified view of race seldom scratches the surface of the tensions within a minority group, and how the external force of white privilege affects that. I guess it doesn’t sell advertising. But tensions among people of the same minority classification are as human as flesh and blood.

In Same Difference, by Samuel G. Roberson Jr., two black college roommates from different backgrounds face both expectations and the stereotypes they have of each other, while navigating a culture of white privilege.

This sold-out hit of last August’s Minnesota Fringe Fest now is reprised as a coproduction of Pillsbury House and Illusion. It features Jermaine Small and Darien Johnson.

Fringe Executive Director Robin Gillette enthuses, “I think it’s great that Same Difference has an opportunity to take on a further life. I’m really proud of the diverse range of shows that the Fringe offers, and this is a great example of that diversity.”

Playwright Doris Baisley’s Peace Crimes: The Minnesota Eight vs. The War, onstage at the U of M, jointly produced with the History Theatre, recalls raids on Selective Service offices.

Director Ron Peluso, Lavender’s 2006 Theater Person of the Year, and producer of the gay hit Farm Boys, relates that from 1968 to 1972, “At the height of the war, a band of young people organized raids on several draft board offices. They were busted by J. Edgar Hoover and the FBI, went to trial, and ultimately were sent to federal prison. It’s a story of courage, protest, and patriotism that is relevant to today’s world. Issues of civil rights and the war merge momentarily, reminding us of the incredibly turbulent times.”

We get a psychotic sense of what closetry does, because Hoover often is held up as the most notorious closet case in US history. And you thought Senator Larry Craig was bad!

As well, catch the affiliated talk by Daniel Ellsberg, author of The Pentagon Papers.

Shakespeare on the Cape, as in Cod, plays both Massachusetts and Minnesota. Their commitment to genderbending and queer concepts has garnered glowing notices, as well as playing the Guthrie a few years ago. They are now reviving Caryl Churchill early ’80s classic Cloud 9 in repertory with heretical master French playwright Moliere’s School for Wives.

Of the presentation of Cloud 9, Artistic Director Eric Holm points out “we never forget how insane it is for patriarch to repress his wife and gay son and black servant, because the patriarch is played by a woman, the wife by a man, the gay son by a grown woman, and the black servant by a white person. How much more subversive and how much more fun it is to see such heterosexual patriarchal values espoused by a story that, even in its shape, rejects those values. And like Tony Kushner’s Angels in America, to add a second half that expands and explodes and illuminates the sharp, precise story of the first half.”

He protested “I can’t direct this. It’s about a pre-emptive war told with triumphalist rhetoric. But as I kept reading the script and, no surprise here, Shakespeare is actually far ahead of me. For every stirring, “once more not the breach” and “band of brothers” speech, there is a subtle, ironic commentary on war, honor, and nationalism. Every heroic moment is followed by one that undercuts or comments bitterly on it, showing us the wide range of human responses to military aggression from myth-making to warmongering, it’s all there. In the end, Henry V is a pro-war and an anti-war play at the same time.”

36 Views, the 2002 play by Naomi Iizuka, examines exploitation of American assumptions about Asian culture and femininity. It looks at the world of visual arts and how we appropriate, or take psychic possession of, a symbol. Hence, corrupt that symbol for impure self-absorbed ends like profit, patriotism, or idiosyncratic sentimentality. And we may be unconscious we are even doing so.

Director John Heimbuch says Iizuka, in his words, “was influenced heavily by Orson Welles’s final film, F for Fake, a masterfully edited train-of-thought about deceit, expertise, and how artwork is legitimized. Iizuka brings these themes a step further, exploring how we attempt to appropriate other cultures, races, genders, and identities through acquisition, categorization, or our own artistic expression. 36 Views shows how these attempts can be manipulated and exploited, and in doing so refutes the concept of cultural appropriation at its core.”
Twin Cities Chekhov Festival
Through Mar. 1
Bryant-Lake Bowl, 810 W. Lake St., Mpls.
(612) 825-8949
www.chekhovfestival.com

Gay Latino actor Jade Esteban Estrada, praised by both Out Magazine and The Advocate, returns to Minnesota with Chek It, Baby for the Twin Cities Chekhov Fest at the BLB. He shares that “most actors in New York learn about the playwright Anton Chekhov (1860-1904) while they are learning about Constantin Stanislavski and the acting technique (he formed) used today by most actors. So for me Chekhov is a very intimate part of my beginnings as an actor. I feel like my life started when I moved to New York to become a performer. So the works of Chekhov were woven into my love for acting. When I was asked to be a part of this event it really meant a lot to me. All self-penned shows are personal, but this seems to me really personal.”

Festival curator Genevieve Bennett says that the Russian “was dealing with replacing the broad stereotypes that populated theater at the dawn of the Modern era, with real people—complex characters with complex psyches—and gender is a part of that. What I think is interesting about the festival is the way in which the artists have chosen to interpret this material – pulling different aspects of the work forward in order to explore it with regards to their own interests and aesthetics.”

Bennett herself has directed what is an utterly definitive production of Chekhov’s masterpiece, The Seagull for the festival. Though every single performance in it is smashing, it’s especially thrilling to see three very talented young actors come into their own with this: Sasha Andreev, Jaime Kleiman, and Sara Richardson. Andreev is nothing short of devastating.

Ryan Hill, gives a hypnotic performance in The Island, an artful take on Chekhov’s account of a prison colony. He is served by a magical score, performed and created by Tim Donahue, and lovely stylized physical movement from Nicole Devereaux and Lisa Moreira.

On a bill with The Island, Hardcover Theater contrasts with broad humor and sharp insight, in the stage adaptation of the short story, The Witch. A hilarious view of being sexually frustrated and snowbound. Director Ryan Ripley nails Chekhov style perfectly: boldly humorous, yet mournfully aware of the sadness of the human condition, especially in rural Russia.

Veteran Stephen Houtz, who gives a marvelously earthy performance in The Seagull, is also a talented composer. He has collaborated with lauded baritone Mark Bauer to render what the buzz out there tells us is well worth catching: A Written Life: Letters of Anton Chekhov. It’s part of a rich menu of other Chekhovian shows that this reviewer just doesn’t’ have time to catch!
The Violin
Feb. 22 – 28
Parkway Theater, 4814 Chicago Ave. So., Mpls.
(612) 822-3030
www.theparkwaytheater.com

In the style of Italian neo-realists Vittorio De Sica, Roberto Rossellini , and ’50s Fellini, Mexican filmmaker Francisco Vargas gives us an alternately poignant and shocking masterwork on the victimization of innocent rural civilians in The Violin.

In a performance for the ages, Don Angel Tavira plays Don Plutarco, an old man with only one hand, who soothes the savage beast with his sublime fiddle-playing. That beast is a military commander played to horrific effect by Dagoberto Gama. And Mario Garibaldi as Plutarco’s young grandson, Lucio, renders a heartbreaking view of childhood that recalls in different ways, the recent documentary Iraq in Fragments and De Sica’s The Bicycle Thief. The same could be said of Martin Boege Pare’s lyrical, raw, and beautiful cinematography.

However, what’s perhaps the most disturbing element of The Violin is its harrowing depiction of rape as a systemized way for military men to dismantle the dignity of the conquered and control them psychologically. The women are brutally violated. The men are emasculated in their utter inability to intervene. One could say this is a consummate statement against the psychotic dimensions of machismo.