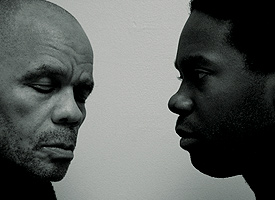 It’s painful to be a member of a minority, period. Your personal need to feel included is primary, while cultural signals that you are to be excluded are pervasive. If you’re black, odds are that you’ll be pulled over for simply DWB (Driving While Black). Gay workers in isolated areas especially know that if you so much as allude to your partner, you can be accused of “pushing your sexuality.” So, it’s easier to bite your tongue, and go along to get along. But it comes at a cost.

Emigrant Theater assesses that cost in Tanya Barfiled’s Blue Door at the Guthrie. For instance, black math professor Lewis (David Wiles) niftily has compartmentalized racism in his head. But when his wife leaves him for refusing to join the Million Man March, his subconscious rebels.

Wiles says that Lewis’s “determination to succeed is to make an accommodation with it that allows him to focus on his career, and overcome race, or so he thinks. So, he doesn’t call people on their racism. He doesn’t make confronting it central to his life. He seems to believe that succeeding as a black man in a field that isn’t welcoming—mathematics—is a triumph in itself.”

However, Wiles continues, choosing to remain silent “means that he internalizes his anger, tries to ignore the slights and overt insult to his dignity, and closes himself down emotionally to his parents and his wife as a result. The cost for his accommodation is the loss of his emotional core, both to himself and his family, and the internalization of rage that finally comes back to haunt him.

Reimagine American classic comedy playwrights George S. Kaufman and Moss Hart in terms of Britain today with contemporary savvy, and you may conjure Charlotte Jones, whose Martha, Josie and the Chinese Elvis is enchanting audiences at Theatre in the Round.

Last year, Paul von Stoetzel jolted the local indie film scene with his thoughtful and disturbing SNUFF: A Documentary About Killing on Camera. He also proved useful as the researcher for Pro Rata’s vivid revival of the sadomasochistic play Quills.

Therefore Shakespeare’s grisliest and earliest tragedy, Titus Andronicus (c. 1593), is right up von Stoetzel’s alley. Legend has it that this revenge tale of pagan Rome has caused more audience walkouts than any other Shakespeare play, because of its unbridled gore, dismemberment, and other depictions of human cruelty.

Von Stoetzel shares, “I draw a subtle distinctions between the beginning of the end of ancient Rome and the United States current unfortunate state of being. Multiple simultaneous foreign wars were one of a myriad of reasons Rome fell, and that warning signal should not go unheeded, or our nation’s doom is imminent.”

Von Stoetzel also intuits queer subtext in Titus, pointing out, “The Goths were decimated by the Roman army during years of fighting. One of the ironies of these situations is that, usually, as was the situation in ancient Rome, a hypermasculine group fighting another leaves mostly women and children isolated in the aftermath. So, we imply lesbianism as a natural choice that the Goths represent.” 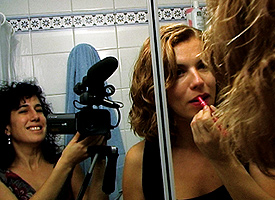 Wanna take a trip this cold winter, but can’t afford it? Well, the next best thing is the Walker’s Expanding the Frame film series and Out There 20 live performance series.

Several films are slated, but queer history informs St. Paulite Esther B. Robinson’s A Walk Into the Sea: Danny Williams and the Warhol Factory, which won Berlin’s 2007 Teddy Award for Best Documentary. Williams, Robinson’s uncle, was Andy Warhol’s live-in lover in the mid-’60s. At the iconoclastic New York studio The Factory, Williams designed light shows for the fabled Velvet Underground. In the film, Robinson also muses on her uncle’s still-unsolved disappearance.

Neumann looks at dance and sports “as both curiously fascinating organized activities,” adding that “aggression plays an important part of the piece, and is mostly physicalized. I included aggression in the piece because I observed aggression in the sports I researched. And although the competitions that flare up don’t add up to any winners and losers in the end, I do hope they bring the audience member toward a more thoughtful and observant place, a bit more curious about our behavior, shared and private.”