Another year, another look back. 2007 was a transitional year for the music business, as the reality of the new economic situation (in a nutshell: unless things change fast, the mainstream record companies are sunk) and a dearth of new sounds made for 12 months of good to great, but rarely spectacular, music. Still, plenty was worth listening to this year—and some of it even ended up on the radio. 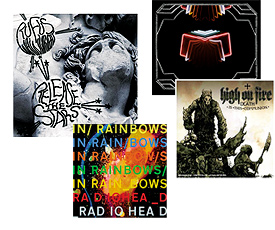 1. Sky Blue Sky, Wilco
Jeff Tweedy returns from the edge with a collection of mature songs that merge his varied musical interests—from classic rock to country to folk—into a tasty meal. The music often sounds like pure heartbreak, but is never depressing.

2. Neon Bible, Arcade Fire
Buried beneath the hype (the album launched near the top of the charts, which may say more about the near death of the commercial music industry than anything else) and a massive hipster backlash was a simple fact: The latest LP from some of Montreal’s favorites sons and daughters is a brilliant work. Musically and lyrically complex, the songs here are also catchy—a rare combination today.

3. Kala, MIA
On her second album, MIA explodes in a kaleidoscope of sounds, styles, and emotions. This is music as heard and interpreted by a singular artist not afraid to take it all to the limit. And the Clash sampling “Paper Planes” is my favorite song—by far—of the year.

4. Back to Black, Amy Winehouse
Winehouse seems to be on a one-way ticket to drug-induced oblivion. At least, we have this striking breakout album, fueled by the hit “Rehab.” While catchy to the max, perhaps Winehouse should have thought twice, and maybe stayed in rehab.

5. Conqueror, Jesu
For two decades, Justin Broderick has been on the forefront of the extreme music front, going all the way back to his teenage tenure with furious noise punkers Napalm Death, and later with his own pummeling act, Godflesh. Jesu sports a quieter Broderick—one who is willing to explore the outer reaches of feedback within the contact of tuneful songs. Between Conqueror and a number of EPs and split releases, Jesu proved that they are kings of the style.

6. Scene of the Crime, Bettye Lavette
Teaming up one of soul music’s fiery legends with iconoclastic Southern rockers Drive-By Truckers was a genius move, as LaVette proves she can crush any wimpy American Idol-inspired “diva” who gets in her way.

7. Death is this Communion, High on Fire
One part Black Sabbath, one part Motorhead, and the rest raw punk attitude, High on Fire are the sludge merchants of choice at the moment. On the band’s fourth album, the trio focuses the energy into pinpoint precision, but it is guitarist Matt Pike’s growth as a singer (no, really!) that is the secret weapon here.

8. In Rainbows, Radiohead
In Rainbows made as many headlines for the way it was distributed (digital at first, with “hard copy” vinyl and CDs now out) as the music inside. That’s a shame, because it’s one of the strongest efforts from the band in years. In Rainbows mixes bona fide songs accented by the eccentric touches of the past few albums. The combination works better than it did on Hail to the Thief, making for music that will outlive its pioneering distribution method.

9. Abandoned Language, Dalek
No, Doctor Who’s favorite villains haven’t gone solo (though that does sound pretty cool). This is hip-hop for those tired of the stale mainstream game. On their latest, the duo merges harsh beats with a bevy of influences—from jazz to noise to electronic—for a hypnotic, but memorable, ride.

10. Release the Stars, Rufus Wainwright
Wainwright may be a drama queen, but he can write great songs, and he knows when to turn that drama up to 11 and beyond.