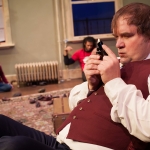 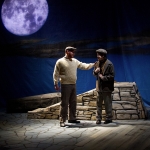 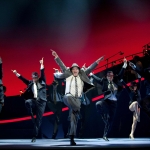 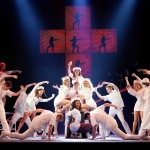 “Gay men have taken to their hearts the music of Piotr Ilyich Tchaikovsky (1840-1893) because it is perceived— rightly or wrongly— to contain all the longing and despair of homosexual angst in a homophobic world. Although he was one of the great musical thinkers, it is for his melodic lyricism and suffering so audible in his work, rather than its complexity or brilliance, that he will be remembered.”
—Gay-centered historian Rictor Norton, PhD In a little more than a year, the Metropolitan Ballet has demonstrated a standard of excellence and a majesty of vision equal to some of the region’s top dance companies. Last year’s ambitious Dracula combined striking multiple choreographic takes on Bram Stoker’s novel. This year’s staging of Mendelssohn’s A Midsummer Night’s Dream, choreographed by Jennifer Hart, was sublimely sensual. Metro’s re-creation of Agnes de Mille’s historic 1942 choreography for gay composer Aaron Copland’s Rodeo also this year was news in itself, but in the hands of choreographer Paul Sutherland it was transcendent.

As one might expect, the Metropolitan Ballet won’t let the holiday season pass without its own unique version of another gay composer’s masterwork, Tchaikovsky’s The Nutcracker. Two years in the making, Nutcracker & The Rat King, reimagines E.T.A. Hoffmann’s tale about little Marie and the Nutcracker Prince.

Artistic Director Erik Sanborn, who is choreographing most of the piece, thinks of the Mouse King as a frustrated bisexual or homosexual, but stresses, “I am not making blatant statements in my choreography about sexual preference. I know who my characters are and what drives their decisions. The audience can make its own call on what is going on. Hoffmann’s story is dark, and layered with [the same] relationship foibles and tensions we see in life.”

However, no question about queerness in an Act II segment guest-choreographed and danced by Justin Leaf. Known for his sparkling artistry with James Sewell Ballet, and his delightful campy parody Broadway Bound and Gagged, Leaf reshapes his role in that show of Mistress Ginger, a dominating diva with “butch and hairy” tendencies. She’s now Mother Ginger in the Land of Sweets and the Sugar Plum Fairy.

Leaf notes, “This role, even in terms of the classical ballet tradition, has often been played by a man who wears an enormous hoop skirt, from under which adorable tiny clown children emerge. As they dance, Mother Ginger typically stands upstage in her platform shoes, and waves like she’s on a Macy’s Day float. Well, the Mistress wouldn’t stand for this scenario. In the new version for Metropolitan Ballet, Ginger arrives en pointe, and flies about the stage along with a group of fiesty young dancers. In this version, the young dancers are portrayed as cookies, and Mistress Ginger is baking in her 1950s Donna Reed attire. A runaway gingerbread boy brings a bit of chaos to the playful mix.”

Another Act II guest choreographer is Shen Pei, who was named Choreographer of the First Rank in China, and is listed in the prestigious Anthology of Chinese Artists. Slavko Billy, founder of The Ukranian Dance Company also choreographs Act II’s famed Trepak dance, which draws on Ukranian tradition.

Sanborn states his message for The Rat King is that “one individual, regardless of might, orientation, or social class, can elect a different path, and still be an effective catalyst for positive change in a complex world.”