No Business Like Cho Business: An Interview with Margaret Cho

Margaret Cho is back, bitches! And better than ever. Fresh off the Australian leg of her hilarious new tour, Beautiful, the controversial comedienne gabs about her latest gig, why her heart belongs to homos, her passion for Perez Hilton, and when she’s returning to a TV near you. It may be a lot sooner than you think. 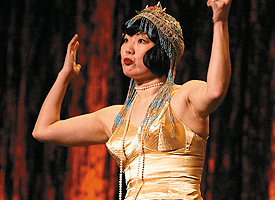 You’re a vocal advocate for the gay community. Do you owe your sense of acceptance for the GLBT community to growing up in San Francisco, or did your parents raise you to be open-minded and liberal?
My parents were very conservative about certain issues, but they were very open-minded about gays and lesbians. They owned a bookstore right on Polk Street, and my father had lots of gay and lesbian employees who would double as baby-sitters for me and my brother. My father was convinced that gay men were the best nannies. It’s true!

In the past 10 years, you’ve become increasingly active in fighting for gay rights. Why do you devote so much time and attention to the community’s political issues?
Because gay rights are my rights. These issues affect me, as I consider myself a part of the queer community. It’s my community.

You’re married to a man, but you’ve never been afraid to discuss your same-sex sexual experiences. Of course, according to the press, that means you’re bisexual. But do you consider yourself bisexual?
I don’t think so, because many of my past relationships have been with transpeople, so I would really be a “quatrasexual.”

All-American Girl was the first—and last—sitcom featuring an all-Asian cast. What went wrong?
So many things. I wrote a whole show about it. Ultimately, we were before our time. I think that if the show were to happen now, it would be successful. Also, I know a lot more about TV and how to make something work now.

Considering that there are shows on TV that feature black and Hispanic families, why do you think the networks haven’t put an Asian family back on television? Do you think that this lack of diversity on TV can be called discriminatory?
It is absolutely racist, and I can’t understand why that is. I think that there are more Asian Americans on TV and in movies in general, which is exciting, but I would love to see another Asian family show.

Perez Hilton recently posted a blog item under the heading “Too Much Information” referencing your own blog post about your period. When something like this happens—i.e., the media gets a hold of something you say or write, and uses it negatively—do you ever have a hindsight moment where you regret ever having said or written it in the first place?
I thought it was funny that Perez posted that. I love him! I think that on some level, you have to let go of what people think, or what things you say, or what people think about what you say—everything will get taken out of context at some point, so I don’t really worry about it.

Last year was a busy one for you. You traveled the country with Cyndi Lauper and crew in support of her True Colors Tour, part of the proceeds from which benefited the Human Rights Campaign, and you created and starred in the Off Broadway show The Sensuous Woman. You must be exhausted. What keeps you going?
I am exhausted! But I love performing, and I’m having a lot of fun right now with my new show. Each project energizes me, and gets me going in a different way. After doing a rock tour like True Colors, and dancing Off Broadway with The Sensuous Woman, I really missed doing stand-up. So, I’m back doing it!

You turn 40 at the end of this year. Will you celebrate? Is this a milestone you’re looking forward to?
I haven’t really given it much thought. I will celebrate, I guess. Birthdays aren’t so special to me, because I celebrate every day. Every day is my day! Forty is a big deal, I guess, but most people can turn 40. All you have to do is live.

Your last big comedy tour was Assassin, a politically charged show that took a lot of shots at the Bush Administration. But your new tour, Beautiful—from the title alone—seems like a complete departure from the former.
I still think this show is political, but it is looking to the personal as political a bit more. It’s also very raunchy, which is super fun for me!

Beautiful premiered first in Australia. What I’ve heard from comedians like Kathy Griffin: the routine can get “lost in translation” in foreign countries. Do you find that to be true? Do you ever have to tweak the show in order for foreign audiences to “get it”?
I don’t know. I guess because often I feel like such an outsider and a “foreigner” in America that my work doesn’t need to be translated as much. Certain places are more reserved, like the United Kingdom, and some places are totally wild, like Australia. I have a good time everywhere I go!

You’ve literally been on tour since All-American Girl ended its short-lived run. But you’re soon returning to TV with The Cho Show on VH1. I’m so excited! What can we expect?
Lots of hilarity, much gayness, and my mother. Yes, my actual mother.

Who is Mikey Rox? Who gives a —-? But you can visit him at www.mikeyrox.com.