N2N:Come in and Play with Andrew Makay

According to the US Bureau of Labor Statistics, nearly six in ten businesses shut down within their first four years of operation. It’s a sobering thought for anyone who may be tempted to invest time and money in launching a business. Fortunately, that thought wasn’t in Andrew Makay’s head when he founded N2N—a line of sensual underwear, swimwear, and bodywear for men. 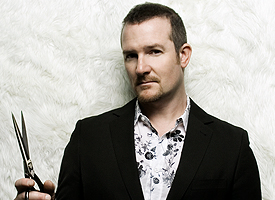 “I might have been scared off and not have done it if I knew the failure rate about start-up businesses. I just went into it blindly, and bright-eyed and bushy-tailed!” Makay exclaims.

The entrepreneur did have some odds working in his favor: Recent statistics peg the average annual household income for gays and lesbians at $57,000, with a total estimated buying power of $800 billion just inside the United States. Since his product was perfectly poised to attract the gay male consumer, all he needed to do was advertise.

As Makay laughs, “I blew a wad on advertising, and got hot models. I was one of the first people to have live models in my window in West Hollywood—it would stop traffic, and got the store noticed!”

Makay’s unconventional, go-with-the-gut approach to decision-making carried over into the rest of his designs.

The risk was all the greater because Makay had no background in either design or business—he was an actor. A cast member in Broadway’s Joseph and the Amazing Technicolor Dreamcoat, he also toured with the show nationally. Eventually, he saved up enough money to seed what he referred to at the time as a “glorified hobby.”

Inspired by a favorite swimsuit picked up years ago in Acapulco—the likes of which was not to be found in the United States—Makay decided to make his own. After six months of trying (working with spandex successfully is the equivalent of earning your black belt), he came up with a redesigned classic bikini. Once the national tour was over, he settled on 17 items for his first collection, found a contractor and a little retail space in West Hollywood, and opened his doors in 1997. Without any retail experience, he had good days and bad.

“Many times, I wanted to quit, because it’s hard,” Makay admits. “Shoppers are finicky. Also, when you have a storefront, you have the elements to deal with. If the weather’s nice, you’ve got clients walking in. If the weather’s not, you take your chances with that. I didn’t always have a full store, and I wasn’t coming out with new merchandise all the time.”

However, the business continued to grow, and Makay eventually made the decision to move online in 2001. Now, in 2008, a staff of six keeps things running smoothly, with Makay as designer and production manager. Keeping N2N running makes for a busy day.

“Besides designing the items, making the patterns, and shopping for supplies, I’m dealing with my two LA-based contractors and getting them set up, and dealing with my cutters,” Makay explains.

To be fair, it’s a busy time of year, and Makay adds: “We’re getting ready for our trade show in February called Curve, where buyers from around the world view your product, so the past few months have been a bit hairy!”

Makay’s line has expanded from 17 swimwear pieces to complete collections in each category: swimwear, underwear, sportswear, loungewear, and eroticwear. In producing his collection, he once again has found success in the road less traveled. While other American designers have turned to overseas manufacturing, he instead has his product made locally, right in Los Angeles. It’s more expensive by far to produce his pieces, but he finds N2N’s customers enjoy a better quality product that will last. Moreover, where most designers traditionally have ignored male sensuality, his designs flaunt it.

“Women are brought up to not be afraid of their sexuality. I think guys, especially in the United States, are kind of repressed in that way, just because of history,” Makay muses. “I think it’s important that in the gay population, we’ve learned to express ourselves, and not be ashamed or afraid of what we do, how we act, what we wear. I feel bad for the heterosexual population to a degree, because they’ve been boxed in, and if they break out of that conservative mold, they’re ridiculed by their friends.”

Makay’s designs translate his views into lower waists, fabrics that drape well, and a cut that enhances the masculine shape. His looks—online at <www.n2nbodywear.com>—range from the metrosexual to the risqué. For example, a sleeker board short may be featured next to a shorter, more European cut, with a shockingly small bikini for the adventurous.

“As a smart businessperson, you have to grow—keep what you know, yet expand upon it,” Makay states. “For instance, I’ve always done little tiny short shorts. So, let’s keep those, but let’s make the long shorts as well. It pulls in that other group of guys.”

Once in the store, they may be tempted to try on something they wouldn’t have considered in the past.

Trying to entice a more conservative clientele is as much a business goal as it is a broader mission for Makay: “Gays are always good. We always find a way of making everything OK, and marching to our own drummer, but our hetero counterparts have to be guided and prodded and shown the way, and, as always, that’s where the designers, the clothing…that’s where the inspiration comes from: the gay styles! You spend so much time at the gym trying to make yourself look good, and you know what? Why not show it off a bit, like the ladies have done all these years?”

Perhaps not surprisingly, considering Makay’s maverick business style, his suggestion for others looking to open up their own business is to follow their own heart: “Take advice from everyone, and weave that into your own ideas, but ultimately, go with what you want.”