Muscle Boys and the Gym

For some gay men, the gym is a place of terror. For others, it’s a home away from home. For Erick Alvarez, the gym is the subject of an intriguing new book. 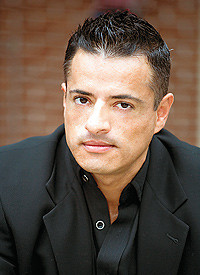 A Costa Rica-born, San Francisco-raised personal trainer, Alvarez understands gay men who work out: muscle boys and circuit boys; athletes; older men; muscle bears; and HIV-positive jocks. Each has his own reasons for going to the gym. Each reaps his own rewards there.

Alvarez knows his way around the gym (and the locker room—more on that later). He has worked out since high school, more than two decades ago.

“Like most guys that age, I wanted to look better naked,” Alvarez says.

Alvarez grappled with his sexuality, and his self-esteem was low. Getting fit raised his self-confidence, as well as easing his concerns about being gay. He became a personal trainer, in part, so he could share that personal growth with others. The book began when he realized the many misconceptions about “the gym.”

Another myth is that going to the gym is “a superficial pursuit.” A bit of vanity also plays a part, Alvarez admits.

“But as people change and evolve, their reasons for working out do, too,” Alvarez observes.

Society has evolved, as well.

“Thirty years ago, gay men were not necessarily accepted at the gym,” Alvarez relates. “There was a stereotype that gay men were limp-wristed and frail.”

The turnaround has been complete.

Today, Alvarez states, “being gay is equated with fitness, athleticism, having a great body.”

According the Alvarez, “average men” make up the largest group of gay gym-goers: “They don’t even identify with gym culture. They just go and work out.”

Older males are the second-largest group.

Alvarez uses “40-plus” terminology, though, he laughs, “Now that I’m 41, I’m having second thoughts.”

For this group, health—not looks—is the first priority. For circuit boys, however, aesthetics is the main focus.

“Their lives revolve around social status and looking the part,” Alvarez explains. “That’s why they’re at the gym.”

Gay athletes—a subgroup whose numbers increase every year—work out to become stronger, and to reduce the chance of injury. Muscle bears, meanwhile, combine aesthetics and health.

“Bears originally did not have the perfect body type,” Alvarez recounts. “But as gay men in general became more health-conscious, the muscle bear became the bear ideal.”

At the beginning of the AIDS crisis, HIV-positive men had little interest in the gym. However, when they realized that anabolic steroids countered wasting—but only if combined with working out—they hit the weights. Their newly defined musculature influenced a generation of nonpositive gay men—and showed everyone the power of steroids.

While the advantages of working out are clear—better health, hotter bodies, higher self-esteem—Alvarez points out the disadvantages, too: “Gay culture is segmenting between men who work out and those who don’t. If you have to run or swim on Saturday morning, and your partner wants to party Friday night, things get complicated. A lot of people have a problem with the new ‘gay ideal.’ For gay men who don’t fit in, this adds one more layer where they feel different from the mainstream.”

One of the most controversial subjects in the gay community—and in Alvarez’s book—involves not the gym itself, but a nearby adjunct.

In Alvarez’s words, “Gay men are either fascinated by the eroticism attached to the locker room, or disgusted. Many of us are conflicted. We feel excitement, fear, sexually charged, ambivalent, trashy, shamed, embarrassed, and more.”

Those feelings often date back to high school. The locker room is the first place many gay boys feel strong sexual urges—and measure themselves against other naked males. It is a place where boys are aroused, and struggle to control those emotions

Alvarez interviewed a 78-year-old who described his conflicted excitement on the high school swim team as if it happened yesterday.

Peering out of the locker room, Alvarez is optimistic.

The 1980s and ’90s saw, as Alvarez puts it, “the oversized, steroid, muscle-boy trend”—but more fashionable now, and probably for the future—is “the more athletic body type. As more gay men participate in sports, that will continue to predominate. And as that group includes older men, more people will realize the benefits of staying in shape. The gym culture will get bigger. Hopefully, it will balance itself out, and incorporate itself into people’s lives—not segment them.”