Since 1986, the Minnesota AIDS Trek has been a major supporter of HIV/AIDS organizations, growing larger each year as more and more people join to help fight for those affected by the disease. The event, an annual two-day, 160-mile bicycle ride from Minneapolis to Duluth, takes place September 6-7. 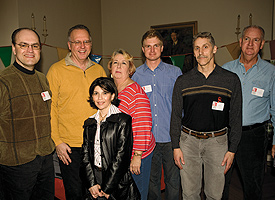 This year’s trek officially started on April 12 at Park House in Minneapolis. Attendees had a chance to meet representatives from event sponsors, and learn just how important the trek is for those involved and for those it serves. Current estimates are that 38 million people are infected with HIV/AIDS worldwide.

For the riders and volunteer crew members, the trek is a great way to help people overcome the difficulties of being HIV-positive, which are not only physical, but also emotional and socially challenging, as well as allow everyone to be surrounded by caring, dedicated people. The trek can be tremendously empowering, letting people know they are doing something about the stigma of HIV/AIDS, and perhaps bringing about discovery of a vaccine.

Trek reporter Victoria Morrison interviewed 2007 first-time rider Jane Hausia, who, when asked what she would tell others, said, “What really was beautiful to me was seeing the humanity. People had so many reasons to bike. There were so many kinds of people. The trek showed me how humanity should work, with people bringing their different skills together.”

On September 6, the trek assembles at 6:45 AM, and departs at 8 AM. Breaks are every 10 to 15 minutes to pace things out. That evening, riders and crew spend the night at a campsite near Grand Casino in Hinckley, or in nearby hotels if camping out under the stars is a little too much. The next day, the trek resumes at 8 AM, ending in Duluth, where riders can shower before being bused back to the Twin Cities later that night.

The trek will provide training rides starting in May, and continuing through the first week of September, to help condition everyone for the long journey.

For more information on the Minnesota AIDS Trek, to register, or to donate money, visit www.aids-trek.org. It lists everything about the event, including safety and training tips.