The new Twin Cities Gay Men’s Chorus (TCGMC) commission is one of its edgiest ever. Through a Glass, Darkly, composed by Michael Shaieb, wrestles with a burgeoning crisis in the GLBT community: methamphetamine addiction. Though pastor Ted Haggard and sex worker Mike Jones turned meth into a standing gay joke, its standard image remains rural, white, and hetero. But that’s not the whole story. 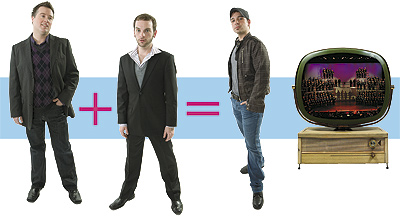 Ryan Hanson, Outpatient Program Co-coordinator for GLBT-oriented Pride Institute, says, “Over the past six months, approximately 25 percent of all the addictions at the residential Pride program have involved methamphetamine addiction. The only chemical higher than that is alcohol.”

Shaieb notes, “High-risk sex accompanies meth abuse. Mixed with a new generation of young men who feel that the AIDS epidemic has passed, we are now seeing a reversal of previously declining infection rates. This is a drug that is anything but exotic, meaning supply will never be an issue, and education is our only hope for abating the problem.”

Through A Glass, Darkly probes the effects of that reversal on gay relationships. It’s the second half of the Ted Mann Concert Hall presentation Friends ARE Benefits. It also will be taped for DVD, broadcast on TPT, and play Miami’s GALA Choral Festival in July.

TCGMC Executive Director Jon Lewis observes that the piece “gives us the opportunity to work with many organizations in the addiction, medical, and legal communities: Hazelden, Pride Institute, the Minnesota County Attorneys Association, Medica, and many others.”

Initially, TCGMC begins its commissioning process with a roundtable discussion with the Artistic Staff: Section Leaders, Principal Accompanist, Artistic Director, and those he feels need to be in on the discussion. They ask three questions:

(2) How does it support the Mission Statement: Gay Men Building Community Through Music?

(3) What is the relevance to the singers—can they relate to the themes of the commission?

TCGMC Artistic Director Dr. Stan Hill explains, “When we have answered these questions, we move to meetings with a variety of singing members, and establish the ‘Commission Committee.’ Here, we discuss the end product: What does it look like? What does it sound like? And we juxtapose the original three questions as to their applicability to a production. When we have come up with what we want to say, how we want to say it, whom we want to say it to, and how it supports our Mission Statement, we conscript a Composer Subcommittee.”

For Through A Glass, Darkly, a search was done through the National Composers Forum and another dozen composer forums. Eighteen applications were vetted, and narrowed to five. Shaieb was selected. Because he also wrote the libretto (book script) and the lyrics, no concurrent librettist search was necessary.

According to Hill, Shaieb was selected “based on his ability to convey through the music the content of the theme of the work.”

Alan Braun generously has underwritten the commission. As a newly sober man in 1984, he attended a chorus performance in the midst of coming out. He found it to be invaluable in fostering his self-esteem. In the years since, his love for TCGMC only has deepened.

As Braun shares, “I became very interested in the chorus’s ability to effect social change. I’m very committed to personal recovery, and have worked as a chemical dependency counselor, and currently work with the Sobriety High Foundation that serves five high schools with an addiction-recovery focus. Stan became interested in the work of Sobriety High, and it evolved into Through a Glass, Darkly. I was confident in the chorus quality and Stan’s leadership, so I knew something special would be created.”

Shaieb relates, “I thought it would be a perfect to set the ‘reality’ of day-to-day meth addiction with an electronic sound, and then explore the broader concepts about human nature and relationships with a more traditional sound. It sounds very heady, but at its simplest, this is a story of a boy addicted to Crystal Meth, and how it changes his life and the lives of the people around him.”

Through a Glass, Darkly tracks 36 hours in the lives of three young gay men sung by tenors enhanced by chorus. Sebastian (Paul Brekke), a Wall Street type, hits bottom because of chronic meth use. He turns a trick named Billy (Justin Scharr) on to meth for his first time. Zach (Bryan Fisher), Sebastian’s longtime partner, also is victimized.

Scharr, himself a survivor of meth addiction, believes Billy is “an impressionable kid, unsure of who he is or who he wants to be. He changes scenes and players often, morphing himself into a clone in an attempt to belong.”

Fisher didn’t go the meth route, but negativity from family, conservative Christianity, and a divorce motivated a drinking problem.

Calling Zach “a doormat,” Fisher feels, “In the gay community, there is so much shame. I see others like me cover up shame, loneliness, and isolation from being rejected. We do this by avoiding reality through different means: partying, drugs, working 80 hours a week, sleeping around. All different forms of addiction.”

In other words, as the Bible states in First Corinthians, Chapter 13, “For now we see through a glass, darkly.”

Such is the murky world of meth, and the GLBT community ignores the problem at its own peril.