The Minnesota Lynx tip off their 11th basketball season in the Twin Cities on June 6 at home against Sylvia Fowles and the Chicago Sky. 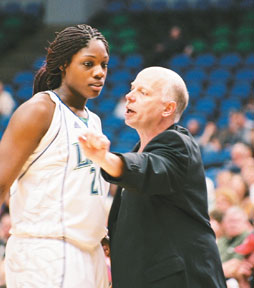 During the 2009 season, 17 home games include two against Lisa Leslie and the Los Angeles Sparks, with 2008 WNBA MVP Candace Parker; one against Lindsay Whalen and the Connecticut Sun; and one against Janel McCarville and the New York Liberty.

The season features several themes and promotions, beginning with the Home Opener on June 6 against Chicago, at which the first 2,500 fans through the gates receive a Lynx 2009 regular-season magnet schedule.

The highlight of this summer’s promotional schedule is the brand-new TGIF Block Party Series, on Fridays, June 12, July 10, August 7, and August 28, 5-6:30 PM, preceding games. Presented by FS North, it offers local bands, plus a pregame cookout on the sidewalk and streets surrounding Target Center (6th Street between First Avenue and Hennepin Avenue). Live radio remotes will be part of the celebration. Fans will have the opportunity to win Lynx prizes.

For a complete schedule and ticket information, visit www.lynxbasketball.com.