Chanhassen Dinner Theatre’s 42nd Street is like champagne on the stage—not the superdry, uberexpensive stuff from France that requires slow, respectful sipping, but the bubbly issuing from California, to be gulped down with exuberance as it overflows the bottle. And that’s fitting, for 42nd Street was born as a Hollywood movie in 1933, giving edgy Americans something to feel good about—at least, for a couple of hours—during the specter of the Great Depression. 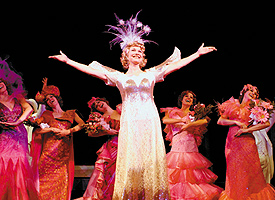 As economic forecasters today skirt around the scary R word, 42nd Street’s story centers on the dread of foreclosure, too—in this case, the cancellation of a Broadway show, with paychecks, bankrolls, and reputations at stake.

You know the story (well, if you’ve rented the classic movie, or experienced Chan’s two earlier productions in 1988 and 1995): ingenue from Small Town USA comes to New York to Make It Big, and fluffs her chance, but when the (aging, envious) leading lady can’t go on, hears those golden words “You! Can you dance?” and saves the day. The creaky plot won’t keep you riveted to your seat, but the songs and dances will. (However, if I use the words “toe-tapping,” please feel free to cut the cord on my computer.)

So, what’s required here is plenty of sizzle, and Chan delivers, big-time. Lots of high-energy musical numbers reveal the company’s reliable stable of performers doing what they do better than anyone else in town, toe-tapping (whoops!—how about “high-stepping?”), and belting their way through worth-the-drive-from-Alaska numbers like “We’re in the Money”; “Lullaby of Broadway”; and, of course, “42nd Street.” Add in classic follies routines like “Shuffle Off to Buffalo” and a few romantic ballads—all requiring extravagant costume changes—and we’ve become completely codependant, delighted to be caught up in the spell.

Chanhassen Artistic Director Michael Brindisi wisely approaches the show with admiration and integrity. He asks his cast to play it straight—sincerely—no wink-wink at the audience, nothing over the top. And that’s a huge reason for this production’s appeal.

Jodi Carmeli (most recently the narrator in Joseph) is fresh and charming as ingenue Peggy, boasting lungs and legs to spare as she adeptly sings and dances her way into our hearts. Tony Vierling (West Side Story, etc.) is back as boy lead Billy, who delivers the same. David Anthony Brinkley loosens up a little to infuse a bit of human vulnerability into the role of producer Julian. Michelle Barber once again is reliable as clockwork as the aging diva. Jay Albright, Marty Rubin, Keith Rice, and all the show-within-a-show’s “kids” meld like an polished orchestra whose players shine in their occasional individual turns. (And they’re not overly miked, thank goodness.)

The unseen stars of the show almost steal it: Tamara Kangas, whose scintillating choreography is right on the money; Nayna Ramey’s blessedly simple, structured set; Tom Mustachio’s adept musical direction of a swell nine-piece pit band; and especially costumer designer Rich Hamson, who employs a subtle and sophisticated blend of neutrals—black, white, and many shades of gray—wisely to ration zingy bursts of color for the production’s show-within-a-show routines.