It rightly is felt by some that assimilationist gays and lesbians threw transgender citizens under the bus by recently excluding transgender rights from the national Employment Non-Discrimination Act (ENDA). After all, men who present as “effeminate” and women who present as “masculine” might offend the right-wing radio mob and nonwhite evangelicals. So, let’s grovel in hopes of appeasing their peevishness. 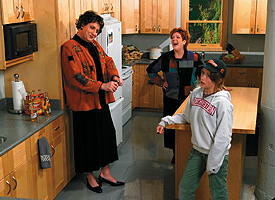 As if they then more easily would concede to gay and lesbian rights! A ridiculous rationalization stranded in phobic binary illusions of what it is to be male and what it is to be female. However, a primary reason we’re stuck in this absurd binarism—which affects intersexed citizens, too—has to do with not having correct information.

Looking for Normal Stage director Terry Lynn Carlson observes, “Fears of anything come down to an inability to understand or to wrap your mind around it in a way that makes sense to you. So, then, people build barriers and build walls.”

Carlson’s observation stems from the “T” issues he has been delving into while rehearsing Looking for Normal. This brilliant joint production by the newly formed Artisphere Theatre and the established Torch Theatre provides an extraordinary opportunity to get a clearer picture of transgender experience.

Jane Anderson’s 1998 drama involves the midlife marital journey of Roy and Irma. After 25 years of marriage, Roy comes out as transgender.

Rather than churning out a transgender tragedy, Anderson renders Roy’s transition as an opportunity for growth, not just for himself, but for Irma, their children, their church, and their rural Ohio community. We even see the bond between the spouses strengthen in unique ways.

Playing Roy and Irma is a couple who themselves recently celebrated their 25th wedding anniversary. Fred Wagner and Sally Ann Wright have not acted in a play together since early in their marriage. But they see Looking for Normal as their ideal project and a labor of love.

Moreover, Wagner and Wright are not new to queer-oriented plays. Wagner played crossgender roles in the Jungle’s Sylvia and Illusion’s Act a Lady. Wright acted in Crisis Point’s Angels in America, Minnesota Jewish Theatre’s Twilight of the Golds, and Theatre in the Round’s As Bees in Honey Drown.

Not surprisingly, they’re longtime allies of the GLBT community. Wright recalls an incident from years ago when two young men in black suits came to their front door with Watchtower Magazines in tow, sharing their fear of AIDS and how it was “God’s vengeance.” Wright countered, “How does your God feel about murder? Because this magazine is killing people, spreading these sorts of lies. I said this is a gay-supportive household, and get the hell off my lawn! I shut the door, and burst into tears.” Upon which her two young children immediately comforted her.

But Wagner is quick to point out Looking for Normal’s universality, about “the whole idea of enduring love. Even though one of the partners makes a choice in his life that the other one doesn’t understand. It reminds me of the way we work through things in our marriage. We bicker. We fight. We have arguments. We storm out of the room.”

Wright interjects, “and we compromise,” saying of Irma, “Here’s a woman, not unlike myself, who is facing tremendous change in her own internal life: menopause, kids getting older, a 25-year-old marriage. Add Roy’s revelation about his need for gender reassignment to that equation, and you’ve got a whale of an emotional roller coaster. But because she is fiercely grounded, and loves her husband and family, she is able to grow and move forward with Roy. Because of her willingness to learn, she gains so much more than she loses.”

But what about the kids?

Randy Schmeling, who plays 22-year-old son Wayne, shares, “I think Wayne’s struggle to deal with his father’s decision is based on his own effort to connect with his manhood. He’s just been dumped by his girlfriend, and is having impotency problems, so the news that his father is getting a sex change further emasculates him. It raises the stakes, and leads to a very macho aggressive climax.”

Taylor Bolstad, who portrays 13-year-old daughter Patty Ann, explains, “I think Patty Ann is a bit confused, but mostly excited. She’s excited that she will kind of be getting a second mom. Only this mom is even going through some of the same experiences that she is as she is growing up. She imagines them painting their toenails together, and complaining about shaving their legs.”

Of course, when one sees a transgender person, one may not even consider that this is a parent with children, with a history, with a life. It’s easy to objectify transgender people as eccentric or worse. It’s easy for some to see transgender people not even as citizens with equal rights. Looking for Normal provides a springboard for looking at such inequality, as well as how to deal with trans concerns on an interpersonal level.

Hence, Artisphere and Torch will feature renowned transgender educator, speaker, and 1999 Lavender Person of the Year Debbie Davis to facilitate talk-back sessions after performances. She also will be making her professional theater debut in a cameo as a surgeon.

Davis, who is thrilled about both opportunities, feels the play is “about love and acceptance of who you are, no matter who that is or what that is. And it’s not about choice. The choice may be about when you decide to deal with who you are. It’s about accepting somebody for who they are. The person doesn’t have a choice. They have to do this. And then, they have a wonderful partner who is accepting of that eventually. But it’s a process we all go through when we first come out to somebody. We expect them to be accepting. However, we’ve been dealing with this all of our life, and we give them 10 minutes. We say: Accept this now! But this person is loving enough to give us that time to get through that process.”

Carlson offers that Looking for Normal examines “how we define love, and beyond that, how does it affect this change in these people’s lives? How does it affect their faith, their family? The minister [Garry Geiken] battles with himself throughout the play to find some resolution, some kind of understanding, some way to make this change work within his framework of how he views the world. And I think we see that with the kids. And we also see it a little bit with Frank [John Middleton], the boss from work. And certainly we see it with Irma. We see her changing. And the grandmother [Mo Perry] as well, who does truly accept it completely in her own way.”

For those who have seen the HBO movie, you likely will find the stage version more hard-hitting and daring. Seeing the story portrayed live and unedited brings forth a whole new dimension of understanding.
Looking for Normal
Through Feb. 3
Theatre Garage
711 W. Franklin Ave., Mpls.
(612) 788-3639
www.artispheretheatre.com