Just in the Nick (and Eddie) of Time

I may have seen entrées presented like a game of Jenga, but in the Twin Cities, I have not yet been subjected to foam—an invention of chef Ferran Adrià that never fails to remind me of SNL’s Bass-O-Matic. Feeling alone among foodies, I posed the foam topic to fellow food writer Elvira Masson (author of the best-selling Le Foie Gras) in Paris last year, and instantly was relieved to find an ally. “It’s very popular in France right now,” she said, wrinkling up her nose, “but…I like to bite.” 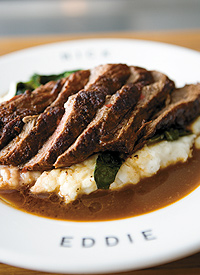 It’s not that I automatically reject an exotic presentation—I don’t—but when it detracts from the pleasure of eating, or worse still, covers for substandard fare, I find myself longing for the simplicity of good food done well.

Chef Steve Vranian (California Café, Stars) and pastry chef Jessica Anderson (Bakery on Grand, Lucia’s) have made that sentiment their mission at Nick and Eddie—a restaurant and bar inspired by its now-defunct namesake in New York.

Doug Anderson, who jauntily describes himself as the restaurant’s “curator,” explains, “When Nick and Eddie opened up in New York, it was in SoHo, and in the ’80s. It was a big part of what New York nightlife used to be like—that people from every sort of background or preference could be in the same place, and nobody cared. That was our idea here: to make a neighborhood restaurant with really good food, and to be inclusive of everyone.”

True to form, when I stopped by, the place was peppered with young professionals, retirees, and everyone in between.

The menu resists being too niched, which, according to Anderson, was a conscious choice: “The idea of thinking something through too much destroys the impulse.”

One can select a simple roasted chicken breast, served with Swiss chard and fries, or do as I did, and entirely devour the braised beef cheeks and accompanying parsnip puree. It was the parsnips that drew me in—so delicately sweet, and so underused—but the tender beef cheeks were memorable. So, too, the smoked whitefish salad appetizer, served with potato pancakes and a lemon wedge—it makes one consider why we bother with tuna. 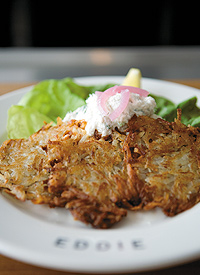 However, the biggest surprise of the evening was the chocolate roulade—essentially, a heavenly reworking of a Ho Ho snack cake. I’m not typically a dessert fan. Raised on Eastern European food, I have a hard time embracing the Midwestern appetite for sugar. But this reworking of an American favorite was sweetened just to the point where one could appreciate the dark chocolate and thick whipped cream without their being overdone.

A full menu, including brunch and lunch, as well as an additional bar menu (served until closing), are available online. Prices are extremely reasonable—most dinner entrées are under $20. An even better deal can be found upstairs, where a prix fixe menu of appetizer, entrée, and wine is only $19.77.
Nick and Eddie
1612 Harmon Pl., Mpls.
(612) 486-5800
www.nickandeddie.com