Istanbul: Just saying it, your lips form a smile. And that’s as it should be—for, what’s not to love (OK, the traffic) about this magic city? In my book, it’s the most romantic destination in the world. The very name conjures visions of sultans’ palaces, exotic bazaars, domed mosques with slender minarets that pierce the skyline, and ships plying the water that divides the city: European on one shore of the Bosporus, and Asian on the other. 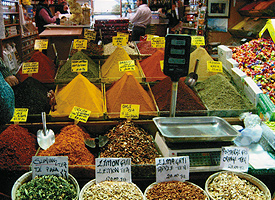 It’s rich with the intrigue of antiquity: originally called Byzantium; then, 1,300 years later, rechristened Constantinople when rebuilt as the new capital of the Roman Empire, the largest metropolis the Western world had ever seen; and next, rehabbed from the tides of passing centuries by Sultan Mehmet II in 1453 to crown his Ottoman Empire.

Yet, it’s a thriving 21st-Century city, too, teeming with 12 million people, all of whom seem to be promenading its iconic Istiklal Street into the wee hours of the morning; browsing among its boutiques; choosing an intimate café for dinner; or settling into a bar for a reviving jolt of Turkish coffee or potent shot of raki, a high-octane spirit fused with licorice.

The city is clean to a fault—no trash, no graffiti, no threats of turista’s stomach. It’s eminently safe. It’s liberal (though predominantly Muslim, most women strut their designer duds). It’s affordable (and one of the few destinations where the dollar is still strong). And, above all, it’s friendly (locals—so gorgeous each could be an artist’s model—are full of smiles for foreign visitors).

Plus, the “must-see” monuments and museums are in easy strolling distance of each other. But, do give in to the temptation to wander down the alluring alleyways unraveling in every direction, where shopkeepers (“Excuse me! Excuse me! Just have a look!”) make used-car salesmen sound like rank amateurs, and café doormen press menus into your hands.

Start with the fairy-tale Topkapi Palace, showpiece of 15th-Century sultans, with its interlocking gardens; intricate harem blazing with brilliant blue tiles; and treasury brandishing a jewel-crusted golden throne and the fabulous Topkapi diamond, big as my fist.

Topkapi’s park-like grounds now house an archaeological museum that dims others in the world with its treasures: the near-photographic likenesses, for instance, of sculpted musicians of 900 BC, each with his own elaborate hairdo, and the grand processional street of old Babylon, lined with walls depicting life-size lions, unicorns, and dragons. Across the courtyard stands another hall of amazing finds from archaeological digs that trace city life since Old Byzantium and beyond. Then, gaze at the frivolous little palace at its side, like stepping into a kaleidoscope of brilliant tiles, teal blue to aquamarine, geometric to intricate floral designs.

Amble a bit farther, and wow! There they are, the twin silhouettes symbolizing the city and all that’s magical about it: the Blue Mosque, with its four sentinel minarets; and the voluptuous Aga Sophya, whose own half-domes, this time in pink, are layered like scoops of ice cream. Built by a Christian Roman emperor, and turned mosque under Ottoman sultans, it’s now a museum whose early Christian mosaics, once plastered over, have been restored in all their golden glory. 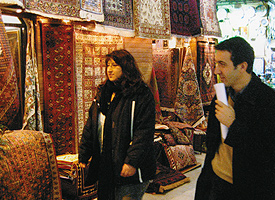 A few paces away stretches the Hippodrome, where Romans raced their chariots, now a grassy promenade anchored by yet another sultan’s gorgeous palace, today the Museum of Turkish and Islamic Arts. Admire its priceless antique Turkish carpets on display.

Next, after you’ve gazed at the Michelangelos of the art form, you’re armed for the Grand Bazaar to ogle the present-day woven beauties. Even if you’re not in the market for such a once-in-a-lifetime souvenir, the 4,000 shops in this teeming city-within-a-city, launched by our friend Mehmet II in the 1400s, offer street theater at its best, selling jewelry (fine to fake), leather, silks, T shirts, you name it—all with nary a price tag in sight, for bargaining is everyone’s favorite entertainment, carried on in jovial fashion over tiny glasses of steaming Turkish tea.

Then, head uphill to the grandest mosque of all, erected by Suleiman the Magnificent (and it is). Or, venture downhill instead to the harbor-side Spice Market, more manageable than the Grand Bazaar, where the hues and aromas—from saffron and cinnamon to dried fruits, nuts, and sweets—hit you smack in the face, and draw you in.

Here at the waterfront, cruise lines compete for your favor, offering leisurely trips up the Bosporus to the Black Sea, past villas of almost Venetian splendor and picturesque fishing villages in which to lunch along the quay before the return voyage.

Back on land, it’s time to take a look at the “new” town on the opposite side of the Golden Horn (no Roman aqueducts nor marble sculptures, but chockablock with charming villas from the 1800s, now housing cafés and shops). Optimistic fishermen spend their daylight hours dangling lines over the connecting Galata Bridge. Seagulls circle, hoping to beat them to the catch. Once across, a perpendicular road (for the hardy, or a funicular for wimps) leads to the Galata Tower, erected by the Venetians in the 1300s, and still a swell lookout for anyone venturing its stairs.

Climbing on, the one-lane trail soon erupts into the broad, pedestrian-only promenade called Istriklal. It’s lined with hip boutiques with names like Flower and Miss Poem; music stores; coffeehouses (yes, even a Starbucks for the painfully progressive); and currency exchanges—punctuated by the occasional mosque, whose muzzein broadcasts the call to prayer five times a day. Fancy public fountains for the ritual washing of feet before invocations stand unused. Instead, passersby simply light up another cigarette.

But it’s the winding arcades trailing off this main avenue that shimmer with intrigue, as Miss Poem gives way to stalls where bargaining is the favored contact sport. Behind the alley’s many fish stands lie scores of tiny cafes in strident competition—claiming to be better, cheaper, fresher, cleaner than the next. Can’t argue about the seafood, and the ever-present lamb is pretty darned tasty, too.

Once seated, trays laden with dozens of mezes appear at your table, so you can point and choose among the sensational cast of starters: rich yogurt mined with garlic; eggplant in countless variations (well, someone who did count found 263 recipes for the favored vegetable); stewed broad beans; grilled liver (explained by my waiter with a finger to his torso); hummus; spicy kibbe; savory dolmas; stuffed peppers; and the list goes on. 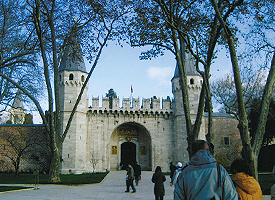 It’s followed by salads, and, as we learned by a visit to the annual Istanbul Gastronomic Festival, they not only are ultrafresh, but also likely to be organic. Next, choose chicken or lamb—the latter in savory meatballs, juicy kebabs, spicy sausages, and tasty chops, always accompanied by twin garnishes, grilled pepper and tomato. As I sipped an Efes, the local beer, at Vesta, a typical café, I watched the street theater through its glass walls, more effervescent even than my Efes.

For an upmarket meal—literally—try the blue-tiled, harem-like Café Pandeli, located above the Spice Market, like eating in a harem while gazing at the waterfront. After way too many mezes (I’m just a girl who can’t say no), the sea bass left me purring. My waiter, trying hard to please with his limited English, answered, “Auf wiedersehn” every time I offered, ”Thank you.”

Develi, another classy restaurant, fulfils its claim to “create delicacies for those who do not consider eating only a physical activity.” Well, I qualify. (And the city’s Zagat Guide agrees, rating it number five among all contenders). Here, among the many mezes, standouts were the thin “Turkish pizza” and cigar-shaped kibbe, climaxing in what might be the nation’s best dessert, a honey-soaked pastry of shredded wheat gilded with pistachios.

In the modern kitchen at Feriye Lokantas, following Ottoman mezes, we dined on an unusual surf ’n’ turf of grilled octopus and air-dried beef wrapped in grape leaves, then succulent sea bass robed in Swiss chard.

A final night at one of those touristic dinner shows. We were pampered with lavish platters (along with endless wine and raki), while musicians and dancers in traditional costume segued from raucous folk numbers to sinuous belly dancing. A Vegas-like emcee belted out songs from every country in the audience. “Volare,” sure, but also anthems from Turkmenistan, Azerbaijan, Macedonia, Ukraine, Syria, Iran, and other neighbors. And that’s the best payoff of all: mingling with non-Western folks who fast became friends, and proved that, despite the harangues of generals and politicians, it’s a small world, after all—and this is a particularly fetching corner of it.