To many connoisseurs around the country, “Minnesota” and “cuisine” seem like a contradiction in terms—unless you’re one of the rare ones who would lend the name “cuisine” to such staples as hotdish, walleye, and lutefisk. But there’s more to Minnesota’s population than our Nordic forebears, and more to Minnesotan cuisine than our traditional fare. 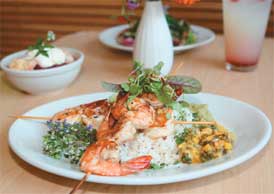 Minneapolis is home to several ethnic grocery stores. One prominent establishment is United Noodles Oriental Foods. This is a case where bigger may well be better, as this store is generally recognized as the largest of its kind in the Upper Midwest (a more prestigious title than one might initially think). United Noodles has been around for a generation, growing all the while. This size allows it to encompass many cuisines of the world’s largest continent, including Chinese, Indonesian, Korean, Japanese, Philipino, and Thai, just to name a few. Among the 8,000 items in its inventory are curry, Thai chilis, ginger, limes, mangoes, coconut milk, and garlic, as well as produce, seafood, barbecue pork, and roast duck.

Just a few blocks (and yet a world) away is Holy Land Bakery Grocery Deli. In this case, “Holy Land” refers to the Middle East, with no small influence from Lebanon and Greece. This store specializes in fresh, handmade pita bread, along with the usual accouterments: humus, olives, spreads, fruits, vegetables, and halal (“allowable,” according to Sunni belief) meat of every kind—goat, lamb, chicken, and beef. Also available are specialized juices, teas, sweets, and dates. Although carbs have fallen out of favor in recent years, you’d never know it looking at the bakery: fresh bread is delivered every day (including weekends), and pizza crusts and pita chips are also on hand. The deli offers gyros, falafel, and kebabs. “Excellent taste without compromise” is their promise to their clientele.

On the other side of the Mississippi River, the cuisine scene is just as diverse.

Dragon Star Oriental Foods is just north of the State Capitol—not by coincidence, at the center one of the region’s largest Asian communities. The meat for sale is fresh. In some cases, it’s really, really fresh—as in still-alive-when-you-buy-it fresh. This state is most common with the seafood—a real rarity here in the Midwest. Specific items include crab, geoduck (clam), lobster, oysters, and shrimp. Nearly as fresh produce is available, often in form of mangos, broccoli, and sprouts. A wide variety of rices, noodles, spices, and sauces is available for sale.

On Cezar Chavez Street in St. Paul is El Burrito Mercado. Ambience isn’t something most people associate with the grocery store experience; this place of eats-oriented commerce is a notable exception. While one might expect one’s nose to be stimulated, it’s in fact sound that makes the first impression on shoppers, as mariachi music is perpetually pumped through the store’s multi-colored interior. Although a wide range of Latin American foods is available, the store obviously emphasizes Mexican provisions. The bakery is a particular standout, featuring numerous Mexican confections and breads, chirios being a particular local favorite. Also available are a vast array of authentic (read: hot) sauces and spices. This St. Paul institution is well-known for its fair prices and high quality, as well.

Slightly less exotic is the national brand Trader Joe’s. TJ’s generated no small amount of buzz when it opened shop in our humble little corner of the world, and it has rapidly developed a rabidly loyal following since. Describing itself as “your unique grocery store,” its inventory includes gourmet foods, vegetarian foods, unorthodox frozen foods, and imports, many of which are considered particularly green. TJ’s understands that some of its offerings are a little alien, according to the Minnesotan palate, so free samples have become a staple. In fact, novelty items are the norm, and every customer seems to have his or her own favorite. These include giant bottles of maple syrup, orange juice, yogurt, vegetable tempura, chocolate covered pretzels, Joe-Joes, or quesadillas…with new items added all the time. The staff is notoriously friendly and helpful. The local TJ’s is one of the largest such stores in the country, and its wine shop sees a lot of human traffic, as well.

Closer to home, ownership-wise, are Lunds and Byerly’s. With 10 Lunds and 11 Byerly’s in the metro, both are considered upscale. In addition to high-end products and services, many of these stores offer cooking classes. Obviously, the Lunds and Byerly’s folks are people who consider eating more than just a basic need. One particularly modern innovation is the ability to buy your groceries over the Internet, then pick them up, or have them delivered.

So, no matter what your food palate requires, there is no shortage of choices in the Twin Cities. It’s just a matter of following your nose to that delectable choice.