By its own admission, the Human Rights Campaign (HRC) has been too associated with being white, privileged, and male. However, unlike countless others, HRC has admitted this fault, which the organization diligently is correcting with its Listening Campaign of the Equality Forward Initiative. Last year, HRC hired Cuc Vu as its first Chief Diversity Officer. 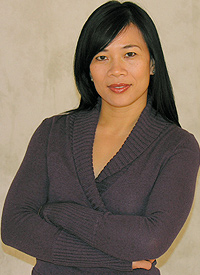 When US troops at the end of the Vietnam War were evacuating the country, Vu came to the United States as a refugee, so, at her core, she understands immigration and racial issues. An open lesbian, she served as the immigration campaign manager for the Service Employees International Union (SEIU), with an eye to coalition building.

Hence, as an immigrant, a lesbian, and someone who understands labor, Vu is an especially savvy choice, because of how the vitriolic right-wing spin machine has lumped queers, immigrants (often referred to as “illegals”), and unions under the rubric of “unfit and undesirable.” Vu will surely have an instinct for how to counteract such labeling.

HRC wants you to fill out its confidential online survey about diversity, no matter who you are in the GLBT community. Visit www.hrc.org/issues/equalityforwardsurvey.asp.

The survey asks how you consider yourself racially, what best describes your ethnic background, and where your ancestors came from originally. It inquires about what other issues you feel strongly or not so strongly about, ranging from health care to the occupation of Iraq. It addresses concerns about HIV/AIDS, sponsorship of foreign-born partners and spouses to become US citizens, military service, adoption rights, and hate crimes. Of course, it encompasses responses regarding same-sex marriage, civil union, and domestic partnership.

The survey looks at how out you are, but makes no judgment. It considers racism within the GLBT community, and homophobia within racially and ethnically marginalized communities, as well as issues around medical care and religion.

Vu explains, “We wanted to check our assumptions at the door to open this organization up, and to engage GLBT people of color to dialogue—to say that we care, and we are listening. What we find out from you will be taken to our program assigning. And we will sit down as an organization to figure out how we fashion our programs and resources to respond according to the needs that you have identified—needs that are urgent for you. We provide a program vehicle for the local level to have specific goals, and reach out into the community.”

According to Vu, local volunteers will be informed and empowered to put the new energy out there. She wants them to go to religious centers, service centers, and book clubs—all kinds of venues where marginalized members of the GLBT community gather.

It’s about those who’ve been left out telling HRC what they want, not the other way around. Out of this will come a new dialogue.

In the Twin Cities, local HRC Diversity Cochairs Bruce Franck and Heidi Schreiber are quite excited about this new initiative. They encourage you to come to HRC’s monthly First Thursday events, open to all. They’re listed on www.hrc.org, where you click on to your state.

Franck says, “We are being inclusive of the entire GLBT community in Minnesota. We see that facet of diversity touch everything that we do. To that end, each of our subcommittees is participating in HRC’s diversity efforts. Our Membership and Community Events teams are working to ensure that all GLBT Minnesotans are included in each of our local events.”

Franck cites a recent dialogue with Gender Education Center’s Debra Davis about trans exclusion from the Employment Non-Discrimination Act (ENDA), as well as a partnership with Lavender Media.

Schreiber adds, “We are more alike than not. If we know each other’s stories and experiences, it draws us closer on a personal level, and helps us to understand. When that happens, we can support each other, and have more affect as a community.”