To avid fans of Bravo TV’s Project Runway, Jack Mackenroth is the one who got away. For non-Project Runway fans, he is the really hot guy on the cover of this magazine. But there’s a lot more to this 38-year-old fashion designer from Washington State than meets the eye, though we won’t hold it against you for staring at his pictures. 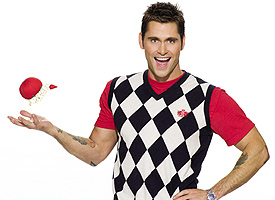 Commit the name and face to memory, if you haven’t done so already, because Mackenroth is turning into somewhat of a poster child for the HIV community. That’s right—he has been HIV-positive for more than 18 years, and is in incredible condition. His newfound celebrity status (from Season Four of Bravo’s hit fashion-designer reality show) has put him in prime position to be the new face of HIV.

We’ll never know how far Mackenroth would have gone this season had he not left Project Runway to get medical treatment. His untimely departure from the show was because of Methicillin-resistant Staphylococcus aureus (MRSA), a serious staph infection, in his face. He received intravenous drugs for treatment, and had facial surgery to get the MRSA under control.

Before leaving the show, Mackenroth flexed his designing muscles, and became a show favorite, winning the Fashion Giant challenge, where contestants came up with an outfit for football legend and Today Show correspondent Tiki Barber. Departing the show under unusual circumstances left the designer with an ever-growing fan base and celebrity status.

Mackenroth takes his popularity and spokesman status with great humility: “I think it’s great,” he says, adding, “I’m not making a big deal of it. I’m an HIV-positive man living a completely normal life. I can do amazing things, and I think that in itself says enough about what I need to say.”

One of Mackenroth’s upcoming stops happens to be Minneapolis’s own Club DIVA fashion show on March 8 to benefit DIVA MN. He will be judging some collections of Minneapolis Community and Technical College (MCTC) fashion design students for the DIVA VIP auction party and fashion show, as well as showing some of his own designs on the Club DIVA runway.

Mackenroth describes his collection’s aesthetic as well-fitting, well-made garments that are classic with flare.

“My feedback from the show has been, ‘Oh, my God, I would totally wear that,’” Mackenroth reports. “I worked in mass-market sportswear for 15 years, so I kind of tend to know what a woman wants to wear, and how she wants to look.”

Mackenroth’s education at Parson’s School of Design in New York City, commercial design experience, and experiences on Project Runway have earned him the well-deserved label “fashionisto.” He is excited to share his ideas with the students. 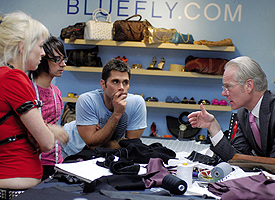 “It should be interesting,” Mackenroth remarks. “It’s nice to know fashion, and know how things are constructed, and to come from an educated point of view, and to be able to judge. That will be fun and interesting.”

Club DIVA is the perfect event for Mackenroth, combining his talent with his cause, and he shares, “It’s all the things I’m interested in. If it just had some ties to swimming in there, I’d be basically hooked.”

Mackenroth is also a competitive swimmer with three All-American titles under his belt. In 2006, he set a national record in the breaststroke leg.

When Mackenroth found out he was HIV-positive in the early 1990s, he saw it as a death sentence: “At the age of 20, to not think you’re going to live to 25, your goals do change, ’cause you don’t have any. Mine were sort of, like, ‘OK, let’s live for the moment now.’”

After a couple of years, Mackenroth’s health remained intact, and his attitude changed.

“I was actually doing really well, and then I got on some medication that was working,” Mackenroth recalls. “My outlook just kept getting better and better, so then, I was, like, ‘You know what? I need to quit going to the Roxy every weekend. I need to pull my shit together. I’m going to have a normal life, for the most part.’”

When Mackenroth first arrived to New York, he modeled, and he recounts: “I always had broad shoulders from swimming, so it was hard for me to fit the sample sizes even then.”

Mackenroth started lifting weights, and found himself a fitness model. But will he go back?

“In a word, no,” Mackenroth states. “I’m too old, and I like food too much to maintain a six-pack.”

But as anyone who has seen Mackenroth’s photos, episodes of Project Runway, or his Flashdance spoof of Irene Cara’s “What a Feeling” (an homage to Jennifer Beals and the rest of the dancing gals) will tell you, his body is still quite intact.

On paper, Mackenroth is perfect, and it almost disappoints you to find out he’s neither conceited nor an ass. But when you’ve got this much going for you, who has time or energy to be one, anyway?