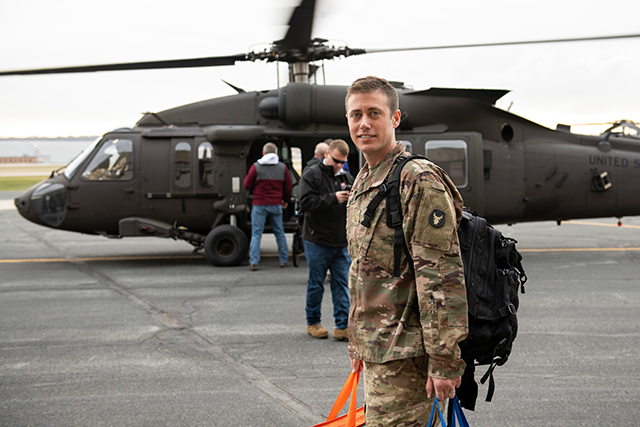 Maj. Tarrence Robertson, seen here on April 8, 2020 as he prepares to travel around Minnesota in response to the COVID-19 pandemic. Photo by Sgt. Sebastian Nemec, MN National Guard Public Affairs

Today, Maj. Tarrence Robertson is living his dream as a proud public servant and member of the Minnesota National Guard. From serving multiple times overseas to now fighting on the frontline against COVID-19, Robertson has been a shining example of success and service. But before any of this became a reality, Robertson was facing rock bottom.

“After high school my life took an unexpected turn,” said Robertson. “By the time I turned 21, I was struggling with alcohol and drug addiction, facing homelessness, and had multiple run-ins with the law. It was at this point I knew that I had to do something different, so I enlisted in the military, which I credit to truly saving my life.”

The Iron Range native parlayed this saving grace into rebooting his collegiate career, enrolling at St. Cloud State University and graduating with a degree in Bio-Medical Science, while simultaneously receiving his commission as an officer in the Minnesota Army National Guard. Robertson has since been deployed to Afghanistan in 2011 and Kuwait in 2018, and received a Bronze Star and a Combat Action Badge for coming under direct enemy fire during his first tour.

Today, Robertson is a Major and serves as an engineer planner for the 34th Infantry Division, which is based out of Rosemount. During the time of receiving his commission years back, however, Robertson was living two distinct lives.

“During this time (prior to my gender transition), I was living as an ‘out lesbian’ in my civilian life,” relates Robertson, “and remained in the closet while serving in the military because ‘Don’t Ask, Don’t Tell’ was still in place, which prevented people from serving as openly LGBTQIA+ individuals in the military.”

Robertson said that his coming out journey spanned nearly 20 years.

Luckily, Robertson’s family was incredibly supportive during this journey. Robertson also said that his cohorts and superiors in the Guard have been nothing but positive in supporting him.

“I was the first person in the MN Army National Guard to complete my transition, so it was a big learning curve for everyone,” said Robertson. “Processes weren’t clearly defined so it was a lot of learning for everyone as I went along.”

Today, Robertson is happily married to his wife of seven years, Julia. His wife was also the first person Robertson came out to as transgender.

“Being a military spouse is harder than anyone can imagine,” said Robertson. “I am gone frequently and sometimes for extended periods of time. They sacrifice just as much as those of us who serve and so few people understand what it’s like to be in their shoes. I am incredibly lucky to have such an amazing spouse; one who stands by me and supports me through every challenge and every journey and continues to make me want to be the best version of myself.”

Recently, he’s been tasked with fighting against a truly unprecedented adversary.

“At the end of March, I was activated in response to COVID-19,” said Robertson. “I am currently working at the State Emergency Operations Center in coordination with other state and local agencies, conducting planning to address possible medical facility shortages across MN due to the pandemic.” 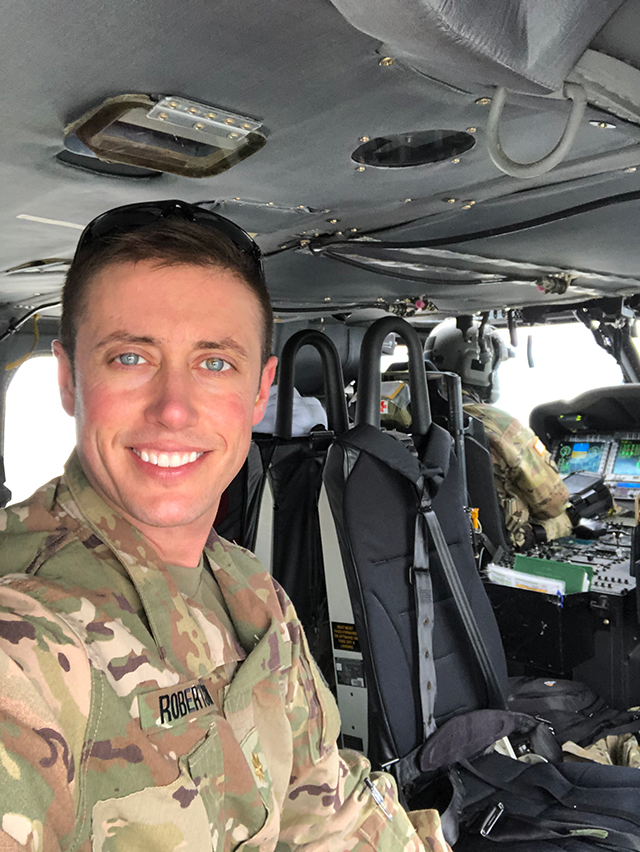 Robertson said that he’s strictly adhering to CDC and WHO guidelines and avoiding going to public spaces outside of work, unless it’s absolutely necessary.

“This has been extremely challenging for everyone in my family,” said Robertson. “Nothing is normal and it is hard to make new routines, stay motivated, and remain positive. Everyone is struggling and it can feel overwhelming at times.”

“My wife and I are lucky that we still have jobs and can continue to provide for the people in our household,” Robertson continued. “So many people are out of work and struggling financially, mentally, and emotionally. We try to do what we can to help and support the people in our lives to get through this together.”

Robertson said that it was especially challenging with his wife being a nurse, where being provided proper protection isn’t always a guarantee in these times, as is the case with many other healthcare workers on the frontline across the nation.

“We worry about her mom who also lives with us and is in the high-risk population, so it is constantly stressful on everyone,” said Robertson.

Regardless, Robertson is taking his responsibilities seriously as a member of the Minnesota National Guard, and is dedicated to keeping his fellow Minnesotans safe as we all weather this storm.

“Remember that if you are someone who feels safe or aren’t worried about how the virus may physically affect you, many others don’t have the luxury of that privilege or good health,” said Robertson. “We all have to practice compassion and get through this together. Continue to follow the CDC guidelines, stay informed, and don’t get complacent.”