Hank Weintraub is a gay athlete. He kicks, scratches, elbows, and grabs opponents’ balls. That makes him no different than any straight athlete playing water polo. In that game, anything goes, so long as officials don’t see it. What happens underwater stays underwater. 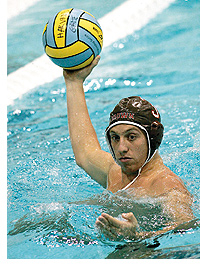 “It’s hard to explain why I love water polo,” Weintraub, a junior at Brown University, says. “It’s like swimming, but so much better. I’ve played since second grade, and it’s still fun.”Six players and a goalie split halves—each plays one half in the shallow end, one in the deep.“It’s very physical, very intense,” Weintraub notes. “It takes speed, strength, stamina, and intelligence.”Weintraub’s forte is reading the game, because, he admits, “I’m not the biggest, strongest, or fastest guy”—he is 5’11”, 185 pounds—though, he jokes, “My Internet stats are 6’1”, 205”.Water polo’s “fairly homophobic” culture is similar to other sports, Weintraub states.That’s not the case, however, at Brown. Los Angeles native Weintraub chose the Rhode Island Ivy League school over California colleges where the sport is more popular. In part, he did not want to red-shirt, which refers to the practice of taking five years to complete college, sitting out of competition during freshman year. Other reasons included Brown’s excellent academics, and the opportunity to enjoy New England seasons.Then, there was Weintraub’s sexuality.With only 12 players, the team environment was tight.“You’re in direct contact with your teammates all the time,” Weintraub observes. “And because Brown is so liberal and gay, it’s not OK to be homophobic. I knew it would be a good place to be out.”After coming out to himself as a junior at LA’s private Harvard-Westlake School, Weintraub told three teammates. But they were not very good players or socially influential, so his secret was safe. Worried about his relations with teammates, a negative impact on college recruitment, and the effect on his younger brother at the same school, he did not come out publicly until just before graduation.But Weintraub was out at Brown even before he enrolled. His new teammates knew by looking at his Facebook profile. They were cool. The senior captain was out, too.Weintraub came out casually to his coaches in the van on road trips, by talking about guys. Assistant John McBride reacted positively, from a unique perspective—he said that having an out gay player “helps us recruit every good, bright gay water polo player.”Despite Brown’s atmosphere, Weintraub believed he was the school’s only out male varsity athlete playing a team sport. Hoping to build a community of people with related interests, he worked with the Queer Alliance to form an organization for GLBT athletes on campus.On the online Daily Jolt—an Internet forum popular on many college campuses—someone asked: “Gay athletes: Isn’t that contradictory?” However, for the most part, reaction was muted.That extended to Brown’s gay athletes themselves. Fewer than a half-dozen came to meetings. Despite low numbers, they held intriguing discussions on topics like team dynamics, and how to handle crushes on teammates.Last fall, Weintraub extended his influence far beyond campus. Writing a blog for the NCAA Web site, he covered the collegiate water polo waterfront—including a discussion of his sexuality.As Weintraub relates, “I think the NCAA chose Brown for the blog because we’re a tiny team, we had a new coach and no pool [the swim center was closed because of structural problems], but we were expected to do pretty well. The coach asked me if I wanted to write it. It was fun.”According to Weintraub, his editor warned him not to come out online: “I was told this was a blog of an athlete, not a ‘gay athlete.’ They were worried that writing about being gay would distort the focus of the blog, or incite people.”Eventually, however, an opportunity presented itself. During a game, an opponent called Weintraub “faggot.” Weintraub wrote that the comment reflected negatively on both the opponent and his school. And, Weintraub added, it offended him as a gay man.“The editor toned down what I originally wrote—to make it more gentle,” Weintraub recounts.As with Brown’s gay athletes group, the reaction was low-key. A few people e-mailed Weintraub. The world did not end.An East Asian studies major, Weintraub is spending spring semester in Hong Kong. This summer, he hopes to receive a Brown Sport and Society fellowship, to conduct research on gay athletes.Looking ahead, Weintraub shares, “I have one more season to go. And when I get back next fall, I’ll keep working on gay-athlete stuff.”Weintraub, who plans to meet with Athletic Director Michael Goldberger to talk about the school’s athletic culture, remarks, “Our new coach told me there was never any real orientation program when he was hired. I think if an athlete says, ‘I’m pregnant,’ ‘I’m on drugs,’ or ‘I’m gay,’ coaches need to know what resources are available.”As for being kicked, scratched, elbowed, or grabbed by the balls, Weintraub can handle that just fine.Dan Woog, a journalist, educator, soccer coach, and gay activist, is the author of the “Jocks” series of books on gay male athletes. Visit his Web site at www.danwoog.com. He can be reached care of this publication, or at [email protected].