The good news about the Twin Cities is that most areas are welcoming to the alphabet-soup community. That Minneapolis has two out members in the Minnesota Legislature and sent the first Muslim to the United States House of Representatives shouldn’t come as a surprise. 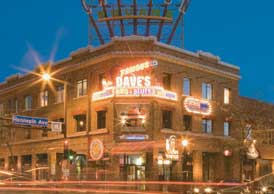 St. Paul has a more blue-collar reputation than Minneapolis, but still can be an inviting place for visitors and new residents. The city has a number of gay and lesbian bars; GLBT-friendly shops; and tons of educational, social, and entertainment options, from massive concerts at the Xcel Center to touring and original shows at the Ordway to A Prairie Home Companion at the Fitzgerald Theater.

Downtown Minneapolis is positioning itself as more of a residential area, but it is still seen by many as a place to go—but what a place! Even if you are not a resident of the district, you can take in a bevy of entertainment options, and numerous nightclubs.

Definite “gayborhoods” are sprinkled throughout the metro area as well.

Since Prince sang it about in 1980, Uptown has been synonymous with funky Minneapolis. The area—centered on the Lake Street and Hennepin Avenue intersection—spreads out to Lake Calhoun. It’s a young (the median age is under 33) neighborhood that, while more expensive than before the most recent boom in interest, is still reasonable. One of its main attractions sits on the border: Lake Calhoun, which includes three beaches for public use, a walking/biking trail that runs the full three-mile circumference of the lake, and a number of other recreational opportunities.

The commercial district includes plenty of unusual and unique ones that cater to many different interests, including the ones at Calhoun Square, located at the district’s prime corner. Also of note are several independent movie houses, including ones that retain their traditional interiors—and single screen. For entertainment, the area boasts numerous restaurants and taverns. Just outside the borders of Uptown, is the Brave New Workshop, a comedy troupe that has presented original works since the early 1960s. In the summer, the area hosts the massive Uptown Art Fair, featuring works by hundreds of talented artists (the 2008 edition takes place August 1-3).

As the site of the annual Pride Festival, Loring Park is a sort of epicenter of GLBT life in the Twin Cities, but the neighborhood offers plenty more than that for the community. The Loring Park neighborhood is on the southern edge of Downtown, with the titular park serving as its heart. The area surrounding it includes more than 7,000 residents and several hundred businesses.

Walker Art Center and its attached Sculpture Garden lie within the area. Those looking for music can walk to nearby Orchestra Hall, while theater-goers can deal with the loss of the Guthrie (which moved across town) in the neighborhood by taking a trip to the Loring Playhouse or Red Eye Theatre.

On Sundays, the neighborhood rings with the bells from a number of churches, including the Basilica of St. Mary, that serve those of many different religious stripes. Area businesses offer a full range of services, from unique shops to ones packed with reasonably priced necessities. And don’t forget restaurants. The varied district’s character extends here as well, with a bevy of eateries offering everything from well-made American dishes to exotic cuisine from around the world.

If you venture across the Mississippi River in Minneapolis, you come to Northeast, an area long tipped as the next GLBT community home in the Twin Cities. You will certainly find plenty here to support and entertain you. This unique collection of the old and the new is one of the more colorful areas in a city packed with character.

In the city’s early days, Northeast was an industrial district, settled by immigrants from Middle Europe. As industry faded, new generations of residents arrived who were attracted by the area’s commanding view of Downtown, the recreational possibilities offered by the river and nearby parks, and the unique architecture in the area. Since then, a revitalized region has emerged.

For the GLBT community, Wilde Roast Café includes a full menu, bar, and varied entertainment. For a night out of a different sort, Nye’s Bar and Polonaise—is the home of Polish cuisine, polka music, and piano-bar covers. And like other neighborhoods in the city, there are plenty of other shopping and eating opportunities for your indulgence.