It has been more than two decades since the winds of queer change swept through college campuses. Across America, they now sponsor GLBT centers, offer gender studies programs, and pledge never to discriminate on the basis of sexual orientation.“Out” has become the new “in”—everywhere, that is, except the locker room. Finally, however, even that is changing. 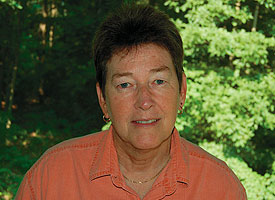 As a young generation of students—raised in a world where gay-straight alliances (GSAs) are as much a part of high school as proms and zits—enters college, they’re coming out not just in classrooms and fraternities, but on their sports teams as well.

“These organizations are about to explode,” Pat Griffin says.

Griffin should know. As director of It Takes a Team, a project aimed at eliminating homophobia in sports; a former basketball, field hockey, and swimming coach; and Professor Emerita of Social Justice at the University of Massachusetts, she has a front-row seat as the movement begins.

As Griffin recalls, it started several years ago, when Paul Farber overcame the depression and solitude that had driven him, as a closeted runner, from the University of Pennsylvania track team. He organized Penn’s Athletes and Allies Tackling Homophobia and Heterosexism (PATH). One aim was to start a dialogue between the school’s gay and athletic communities, in hopes of creating a safe environment for GLBT and questioning athletes, coaches, administrators, and fans. Another goal was to provide resources for athletes wishing to come out. A third was to educate straight athletes and coaches about GLBT issues.

Griffin realized a similar group could work at UMass. She helped a lesbian basketball player there team up with three health-services employees. They called themselves the Gay-Straight Athlete Alliance.

“We modeled the name on high school Gay-Straight Alliances,” Griffin explains. “We thought that might attract more people than if we were just a ‘gay athletes’ support group.’”

The UMass organization faded away after the basketball player graduated. Recently, however, a male baseball player on campus e-mailed Griffin, asking for help reviving it.

At the same time, Griffin heard of similar efforts at Brown University and Vassar College. She also received a letter from a former athlete at Princeton University who was interested in creating a resource center for Ivy League athletes.

Why gay athletes? And why now?

“The time is right,” Griffin states. “There’s more recognition that college athletes are gay. Lesbian athletes often have their own social circle, but it’s underground and informal. Male athletes are usually socially isolated—not connected with anyone at all. For gay male and female student-athletes, these groups provide a way to come together and help each other.”

Gay-athlete organizations also can help by tackling homophobia within athletic departments. Griffin suggests several activities, such as initiating a Safe Space campaign; lobbying for education for the athletic staff; and making sure coaches know campus and state policies and laws regarding gender and sexual-orientation issues.

In additions, groups can bring in outside speakers, including celebrity athletes.

According to Griffin, “They can take GLBT issues to their student-athlete advisory council, and work with captains and athletic directors. They can volunteer to talk to different teams. They can work at the NCAA level, too.”

Each campus is different, and, as Griffin points out, “Some departments are not as open as others. If you’re just starting out, you have to examine the climate at your school and in your athletic department. You have to be smart and strategic in figuring out what to attack first.”

Yet, Griffin observes, teaming up is always important: “Athletics is often an island of homophobia and bigotry. Involving other GLBT groups on campus helps. Sometimes, they’re already looking for a way to help athletes, but they don’t know how.”

New student-athlete groups should ask themselves: Do we want to include straight allies, or just GLBT people? What are our goals? What’s the best place to meet: the GLBT center, an athletic facility, or a neutral site on or off campus? What activities should we sponsor? How can we publicize ourselves and our events? How can we find time in our busy schedules to make this work?

Griffin, who is excited about the trend, concludes, “Change has to happen at all levels. Student-athlete activism is something we [who are involved in the college sports world] haven’t really tapped into yet. But so many athletes are coming into college after being out in high school. They’re ready to address this issue. It’s a great way to breathe new life into college activism.”