Just as this issue went to press, in an exclusive to Lavender—he wanted the story to break first in the gay media—Gay 90’s owner Mike Bloom announced that he is in the process of finalizing sale of the bar. It’s the latest in a series of events that have transformed the Twin Cities gay bar scene markedly since 2006. Although many details of the sale—most notably, the new ownership—cannot be made public immediately for legal reasons, it’s clear that the Gay 90’s is about to change hands for the first time in nearly three decades. 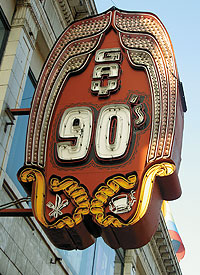 According to Bloom, the new ownership has assured him that the venerable Downtown Minneapolis landmark will remain what it has been for five decades: a bar serving primarily the gay community. As well, he relates, the present staff will remain in place after the transition, with the exception of Bloom and longtime manager Joey Yankovich, both of whom are retiring.

As Bloom recounts, “Joey, who turned 70 last July, came to me one day, and said he wanted to retire. The next day, as fate would have it, even though I hadn’t been looking to sell or retire, someone contacted me inquiring about purchasing the bar. They turned out to be the right buyer, who would keep it in the gay community. My wife, Mary, and I will miss our staff and our customers at the Gay 90’s very much, but I told her it was time to sell, and she agreed.”

In 1957, the Happy Hour opened as a gay bar. Despite its name, the original Gay 90’s next door was a straight club until 1975, when it went gay and acquired the Happy Hour. Bloom’s parents, Mort and Marcia Bloom, bought the establishment in 1979. Over the years, the Blooms expanded the premises to encompass the entire upstairs (most of which is now the La Femme Show Lounge) and adjoining space at Fourth and Hennepin (presently the Dance Annex and Men’s Room). The Gay 90’s is now the largest gay entertainment complex in the Upper Midwest.

Watch upcoming issues of Lavender for more news about the pending sale of the Gay 90’s, as well as a feature about the outstanding legacy of the Blooms in the local gay community.