“Usually, after a show, I’m so exhausted that I devour a steak or something like that to replenish all the iron in my body. It’s sort of a triathlon. You’re acting and singing and dancing. There are 27 songs, and I only get to leave the stage twice.” 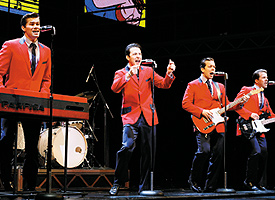 Tony Award-winning Jersey Boys, opening at the Orpheum, chronicles the career of Frankie Valli and the Four Seasons. A tune like “Big Girls Don’t Cry” vibrates to Valli’s visceral signature falsetto of the early ’60s in contrast to a smoother ’70s sound with “December 1963.” It means the actor playing him must master that range and the play itself.

Production Supervisor Richard Hester says, “If you had a list of the most challenging roles in all theater, they would include King Lear, Mama Rose in Gypsy, and Frankie Valli in Jersey Boys. We’re asking of the people who play Frankie Valli to age over the course of the evening 40 to 45 years. We’re asking them to sing 27 songs, most of which are in high falsetto, and to dance and act. We’re also asking them to essentially be a star.”

Frankie Camp addresses this, and gives young auditioners—mostly in their 20s—a more relaxed workshop type of experience than your typical casting process.

Production Dance Captain and Frankie Camp coach Peter Gregus explains, “It’s a daunting task, to say the least, to be auditioning for the role of Frankie Valli for Frankie Valli. Can you imagine singing ‘Can’t Take My Eyes Off of You’ five feet from Frankie Valli?”

As dance expert, Gregus knows the strong suits of contenders are apt to be singing and acting, not dancing. So, he spends more than eight hours helping them to expand physical consciousness, teaching them bits of choreography that reflect Jersey Boys’s range of time periods from the late ’50s to circa 1990.

Frankie Campers are guided vocally by Katie Agresta. Though trained in classical voice with the late Edward Dwyer, she has coached rock legends Cyndi Lauper, Annie Lennox, and Bon Jovi.

Agresta relates that Broadway style includes what’s called “chest voice, belting, head voice, and all these different things people are asked to do. And in rock singing, the style is not so specific, and it’s pushed. Pushed means a straighter tone and a little bit of nasality. It’s still a beautiful sound, but it has that tightening of the tongue and the jaw, the roof of the mouth, that makes it stay straight like that.”

As Agresta, who studied with the late Wesley Balk in Minneapolis as well, notes, “In Broadway singing, they would sing a chest voice, and then flip it into a head voice. But Frankie Valli didn’t do that. He was able to, because of his amazing instrument, kind of glide through into his falsetto. His falsetto voice is very connected to the rest of his voice, with no big jump into the sound. It was just part of what he was able to do.”

It’s also what the actor playing Valli must be able to do.