Love can be found anywhere. With the film Shelter, it comes in the form of a former surfing buddy. Writer and director Jonah Markowitz came up with the idea while he was at home in Colorado: “I saw two guys tossing a Frisbee back and forth, and I wanted to make a movie with two guys falling in love outside, not in a bar.” 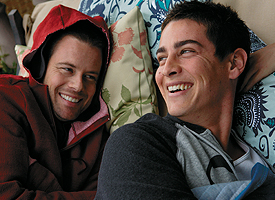 Set in California, the movie focuses on selfless Zach (Trevor Wright), who has forgone his dreams of art school to help take care of his less-than-motherly sister and her son, while working at a dead-end job. When not caring for everyone else, Zach heads off to the ocean to get in some surfing.

Markowitz said of the story that he “wanted [it] outside, active in the outdoors, yet urban.”

This angle keeps Shelter from becoming a cliché gay film like so many others. It doesn’t focus on Zach being gay, but on his trying to figure out his life. At no point does the movie openly reveal that Zach is gay, but it instead discusses his heterosexual relationships, along with the homophobia that surrounds his life and the sport of surfing.

Though marketed as a gay film, Markowitz sees it as not just a gay surfing movie, but rather one “about family, life, love, and finding out who you are—embracing the family you have and create. I want it to be seen as that, not as guys running shirtless on the beach.”

It’s during his surfing time that Zach connects with his best friend’s brother, Shaun (Brad Rowe), and the two form a bond that fulfills a desire in Zach: to have someone actually care about him in a way no one else in his life does. The film follows the two as their relationship grows, while at the same time Zach begins to struggle with what his life means, and what he wants to do with it.

Though the film begins to take a predictable turn toward the end, the chemistry between the characters keeps it interesting, and the audience rooting for a happy ending.

According to Markowitz, it’s “a movie anyone can enjoy, a movie about family and about people you love—so bring them with when you see it.”