Every generation is defined by an event—a point in history that is remembered forever. Some events are positive, changing the world around them for the better. Others are forged by tragedies so profound that those who lived through it recall where they were and what they were doing. The technological generation was shown a horror like no other in human history: 9/11. The world saw, not the aftermath of the towers falling, but the falling towers themselves. Everyone watched as thousands lost their lives. 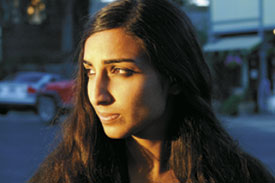 Valarie Kaur, a third-generation Sikh-American, looked at these same horrors. What many people viewed afterward was the amazing outpouring of help—the banding together of America to overcome this hateful tragedy. Kaur was learning a new lesson herself, though. Her family had been here for nearly 100 years, but for the first time, she saw herself differently.

What most people observed was the heartfelt compassion that Americans aspire to—jumping in and helping when help is needed. But Kaur received phone calls and e-mails that showed a different side.

Kaur recounts the story of a man “running alongside thousands to escape the collapsing twin towers, when people start pointing at him, yelling, ‘You terrorist, take off that turban!’ He finds himself running for his life for the second time in one morning.”

It was days later, while trying to escape from a world where her country was afraid, and her Sikh community had become so disempowered, that Kaur realized the stories she was hearing and reading about actually weren’t being documented in the media.

And so began her journey that Kaur says “changed the course of my life. It shaped everything I am—what I study, what I think about, speak about, dream about, who I know myself to be”

The University of Minnesota recently screened the resulting film, Divided We Fall: Americans in the Aftermath. Kaur traveled across the nation to capture the lives of those affected, but not seen. It wasn’t only the widows and families who lost someone on the planes or in the towers, but all those who had to live with post-9/11 America.

Kaur relates, “When we were on the road, we found that hate, violence, and subtle daily acts of prejudice against those perceived to be enemies and outsiders happened in every city. The picture of the turbaned and bearded bin Laden was held up to our entire nation—the image was in the air, and our bodies couldn’t help but absorb that stereotype.”

Though the film shows that those terrorized are Americans who have the same hopes and fears as everyone else, things are not getting better. With the wars in the Middle East and continued terrorist attacks, Kaur understands what the picture of the enemy will continue to be: “It will be my face. It will be the faces of my brothers and sisters. It will be the faces of millions of Americans who deserve to be recognized as fellow citizens.”

But in times like this, every American is looking for hope. Although the country is divided—by income, race, sexual orientation, and political views—a film like this can bring unity. Kaur has seen the film do so for many.

In Kaur’s words, “People are inspired to share their own stories, and their stories have given me insight into what binds us together as Americans. The old paradigm is falling away—red state/blue state, mainstream/minority—as people everywhere share a common longing for recognition, for safety and peace, and for authentic stories and leadership to take us there.”

Experiences can and do change who we are. They can bring hope to those in despair. They can lift us up to carry on when all we wish for is for everything unpleasant to stop.

Kaur “discovered that all of us—every single one of us—has experienced what it is like to feel like an outsider. Whether in our ancestral history—as Native, Black, Latino, Asian, Jewish, Catholic, German Americans—or in our own lifetimes, we remember what it is like not to be seen for how we see ourselves…that it is possible to face destruction and violence, reach deep inside of it, and create something redemptive: a story of hope that redeems that time. I have learned that I don’t have to be a victim to violence, a victim to the death and despair always on the evening news. I am empowered to respond to it, as are all of us who can envision something better than this. In the small ordinary acts, we can live in ways that build the kind of country and community we envision.”

For many, the world has moved on since 9/11. For others, they are reminded of the losses or changes in their lives daily. But as Kaur has proven, the world can change for the better. We just need to stand up and change it.