Pangea World Theater’s first queer-oriented production, Ramble-Ations: A One D’Lo Show at Intermedia Arts, reflects on being born gay in a Hindu family and raised on Hip Hop. Bicoastal performer D’Lo, a Tamil-SriLankin, prefers “gay” to “lesbian,” because, as she explains, “‘gay’ is the word that encompassed and empowered everyone who wasn’t hetero under one umbrella, much in the same way ‘queer’ is being used today. Who I am is also about gender. I would still be super ‘dude’ and carrying masculine energy even if I were to be stripped of clothes, or if I were to be celibate for the rest of my life.” 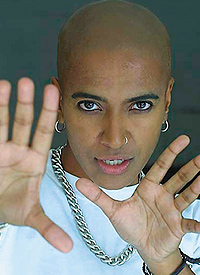 And Hip Hop fuels that energy, according to D’Lo: “Hip Hop is the culture I was raised in and by. I am Hip Hop, gayness, and all. It [all] influences every moment I am onstage, as does my spirituality, as does my masculinity, as does my womanness.”Regarding Hinduism, D’Lo shares, “If ever anyone, Hindu scholar or priest, tells you there is no place for gays in Hinduism, I have plenty of research and knowledge that can refute the best of them.”Ramble-Ations: A One D’Lo ShowApr. 17-19, 7:30 PMIntermedia Arts2822 Lyndale Ave. S., Mpls.(612) 203-1088www.pangeaworldtheater.org