Diversions, a new GLBT bar in Downtown Eau Claire, Wisconsin, debuts March 28. A Grand Opening Extravaganza takes place April 25-27. Tim Romans is the owner of Diversions. In the early 1990s, he was manager of the Brass Rail and Saloon bars in Minneapolis, where, as “Sister Betty,” he originated the bingo fund-raisers for The Aliveness Project. 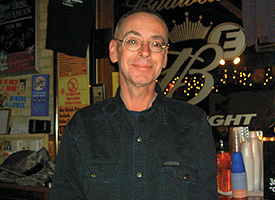 Romans says of Diversions, “We’re friendly, not fancy. We want everyone to feel welcome, and well-served. Patronage won’t be taken for granted.”

“We’ll have an ear to the community for direction—for where the bar will go. We’re looking for input from everyone.”

Although Romans plans to remodel Diversions in the future, the present cozy ambience reminds one of The Wolfe’s Den, the beloved Eau Claire bar that closed in 2005 following the untimely death of owner John Wolfe.

Romans emphasizes, “My goal is to complement, not compete with, Scooter’s.”

Still allowing smoking, both bars are only an hour-and-a-half from the Twin Cities.

Diversions currently is hiring for several positions at the bar. Contact Romans at (715) 556-3377.