Cuisine in the Clouds

As my partner, Chad, and I guided our culinary vacation troupe up a 900-foot, narrow, suspended, cement walkway, it felt as if we were leaving the real world.

Our destination, Civita di Bagnoregio (in the Lazio region of Italy, about an hour north of Rome)—or simply Civita (chee-VEE-tah)—is perched on top of a hill at an altitude of 1,440 feet above sea level, between two valleys running in an east-west direction, on what is called the “Italian Grand Canyon.” It’s a city ruled by wind and erosion. The population has dropped to 14, but the town survives. 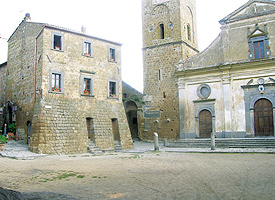 Civita was picked as part of our culinary vacation itinerary to display an Italian city nearly unknown, a place our guests possibly never would encounter again—and for the Trattoria Antico Forno.

We passed under the ancient gate of Santa Maria, as we herded the troupe (usually five to ten people) to the Antico Forno, a very old building in the town square in front of the church. Wild donkey races are held in the square on the first Sunday of June and the second Sunday of September. The church, Chad told everyone, marks the spot where an Etruscan temple, and later a Roman temple, stood.

Once through the thick wooden doors, and up a small staircase to the Civita B & B and Antico Forno (Antique Oven), our group was greeted by owner Chef Franco Sala. Antico Forno’s walls are covered with newspaper articles heralding Civita’s beauty and Sala’s fine Italian cooking, plus reviews by travel authority Rick Steves. He and Sala have become good friends, as Civita is Steves’s favorite hill town in Italy. Everyone was invited to crowd into Antico Forno’s kitchen to watch Franco prepare a simple but versatile pasta sauce.

As Sala shared with the class, “This basic sauce is a simple Italian recipe that can be divided into two separate pasta dishes. The sauce base can be kept for up to one week in the refrigerator. After we prepare the sauce, we will add our pasta, and make Tagliatelle with Medieval Sauce [tagliatelle, tomato, sausage, sweet red pepper, and Parmesan cheese] and Piciarelli alla Boscaiola [piciarelli, tomato, asparagus, and boletus mushrooms].” 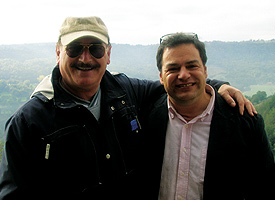 Sala began by pouring extra virgin olive oil, which recently had been pressed at the local olive mill, into a heavy-bottom pan that had been well-used. I could smell the lush flavor of the warm oil. When he added garlic to the pan, the entire kitchen immediately sprang to life. Our clients smiled in delight, as Franco took his meat/cutlet pounder, and slammed it down on the garlic clove. The peel popped off, and the garlic smashed into little pieces, which he scooped up and into the hot pan. Chopped onions, carrots, celery, and several pounds of fresh chopped Roma tomatoes were other ingredients of the sauce.

Next, Sala noted, “We’re almost finished with the basics. Now, we add sugar to cut the acid of the tomatoes, and, for flavor, granulated chicken stock [Knorr brand!] and a little water.”

As Sala turned up the flame on the stovetop, he explained, “Lastly, we add a good red wine. But you must reduce the liquid and alcohol quickly. So, turn up the fire.”

Once the sauce was complete, Sala said he would “jump in the pasta.” He separated the sauce, and created the two dishes we would dine upon. In one, he put cooked chopped asparagus and boletus mushrooms; in the other, fried pork sausage and sweet red pepper. As he placed fresh pasta in each pan, he threw the entire contents of the pan in the air to mix and blend the ingredients—“jump in the pasta.” He showed each person how to “jump in the pasta” by using sea salt in a frying pan, and throwing in the air until all the granules returned to the pan. He suggested practicing with salt before throwing scalding sauces. 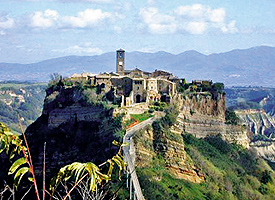 Our pasta entrées were ready. We sat at a long table in the dining room with ceramic pitchers filled with wine. Bruschette with black truffle, sweet pepper, green and black olives, tomatoes, pumpkin, and chicory sauce were brought out. Two hours and four more courses later, our lunch was complete. Everyone was satisfied, and we sadly said “ciao” to Sala and the Antico Forno.

After a couple of hours walking the ancient streets of this amazing hill town, our day needed to end, and we descended back to a world that left Civita behind hundreds of years ago. To listen to everyone’s comments in the vehicle as we drove away was a joy. No one could believe the place we had just visited. Quietly, I drifted off to sleep listening to the chatter of their astonishment.