Cruising may be the politically incorrect opposite of commitment, but cruises can mark the beginning of an interpersonal commitment that will last a lifetime. “We do a surprising number of commitment ceremonies,” according to David Lawrance, owner of Paradise Charter Cruises which, almost incidentally, has become proficient and prolific where GLBT commitment-making is concerned. 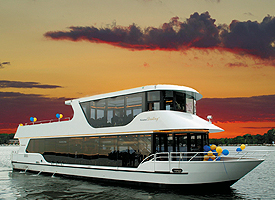 That increase has been a long time in coming.

As Lawrance recalls, “Our first commitment ceremony was on Lake Minnetonka—probably 1994 or 1995. It was a while ago.”

Although Paradise Charter Cruises has sailed Lake Minnetonka for more than two decades, its most recent expansion has generated the loudest GLBT buzz…which is not the least bit surprising when you consider the vessel’s name: the Minneapolis Queen.

Categorized as a “paddlewheeler,” the Minneapolis Queen is a 125-passenger water vehicle that offers a singular setting for couples wishing to lend a timeless quality to their eternal commitment. How legally binding that commitment will be is up to the couple.

“We do have a list of judges and whatnot to perform certain ceremonies,” Lawrance relates, “but most couples already have in mind who they want to use.”

The exterior of the Minneapolis Queen may put the “oh” in retro, but her insides are a different story altogether. 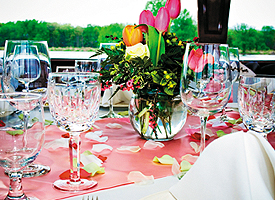 “The boats themselves are five years old or newer, and they’re professionally decorated,” Lawrance notes. “We’ve put a lot of emphasis on giving the interiors a real nautical look, but not overkill. We have large LCD monitors on all of our boats. We have fantastic sound systems. We also have a really nice luxury suite that we offer. My wife and I have invested more than $5 million over the past four years to update our fleet.”

Those dollars delivered a lush, panoramic backdrop through which drama queens can pair up.

Lawrance promises, “We provide the background. We provide the backdrop, the vessel itself, the venue arrangements. All of that can be scheduled through us. We create a really nice venue. Minneapolis, on Boom Island Park, is where we have land-based ceremonies. Plus, on Boom Island, you get a nice view of the Minneapolis skyline, too. We’re working on the City, and they’re going to put in a nice gazebo for us. We have the lighthouse, where a lot of the actual ceremonies take place. So, we’ve got a lot of options for people.”

Those options extend to the ceremony’s Where, as well as its What

“A lot of people will do a land-based ceremony, and then, they’ll board the boat, and do the reception on the boat itself. So, that’s one option,” Lawrance points out.

And clients who like to mix their drama with Dramamine needn’t feel left out. 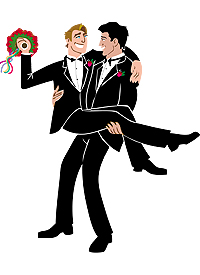 As Lawrance explains, “If they want to do the ceremony on the water, we can accommodate that. We did a commitment ceremony last year on the Minneapolis Queen during one of our public cruises. They set up an area on the outer deck, and they had the whole Admiral’s Cabin, which is on the upper deck of the Minneapolis Queen, for the ceremony. It worked out really nice.”

The actual broom-jumpings are often the most conspicuous part of the wedding experience, but they aren’t the only one. Wedding receptions, gift openings, and the wedding party function are also observed over the waves.

“We do close to 60 to 75 rehearsal dinners a year, if not more,” Lawrance estimates. “We do a lot of engagement-party-type deals. We do a lot of couples celebrations, too. [The cruise] is such a unique venue that people find lots of things to do.”

Regardless of the element on which the knot is tied, Lawrance maintains the same standard of lushness: “I wanted to create a venue that took people from their everyday hassles, and everyday things they see in life. I wanted to give them a place to relax, and enjoy a good time in a very memorable location.”