Before—long before—the Guthrie, there was theater in this town. In fact, that’s a major reason Sir Tyrone Guthrie gave for locating his American presence here. Twin Cities theater buffs were so passionate about the art form that they didn’t wait for Actors Equity pros to get their act together. They organized community theaters, and put on shows. 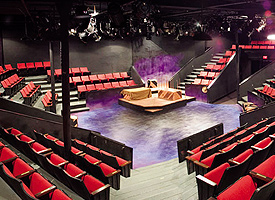 Community theater is alive and well here more than 50 years later, despite, or, more likely, in tandem with, the scores of professional troupes that have arisen since, several of which they helped birth.

By its democratic definition, community theater is composed of volunteers, which translates to unpaid talent. Sure, the genre includes valiant attempts by the local PTO to stage Our Town. But in our metro, it’s symbolized by two highly respected and well-reviewed companies, each boasting more than 50 seasons: Theatre in the Round Players (TRP) and Bloomington Civic Theater (BCT).

Maybe you’ve seen their shows, paid the modest ticket prices, and come away thinking, “Looks like fun! Wish I could do that!” Well, the very heart of community theater is its democratic setup, meaning, “You bet you can. C’mon over.” And if not for a place on the boards, then maybe building them—or stitching costumes.

And no constraints to “play nice” are in place: TRP’s lineup is not for the brain-dead. This season alone includes a play by Sam Shepard, William Shakespeare’s Henry V, and Eugene O’Neill’s Long Day’s Journey Into Night (as well as a couple of feel-good numbers like Harvey).

TRP has blazed the way for previously underserved genres. Consider this: 1975’s area premiere of The Great White Hope opened the arena to black actors—TRP dedicated proceeds from the performances to help start Penumbra Theatre. By pioneering color-blind casting of an Athol Fugard play—another area first—TRP paved the way for Mixed Blood Theatre. Producing The Faggot in 1976 proved that an audience existed for gay theater—a special benefit performance provided funds to launch now-defunct Out and About Theatre. Native American writing was honored in a 1977 show. In 1989, TRP launched Youth Performance Company, which grew to achieve independence in 1993. TRP first dared nudity on the serious stage in the area premiere of Equus back in the early ’80s. In 1994, TRP played host to the first Fringe Festival. And the list goes on.

Bloomington, too, doesn’t choose to snooze through yet-another Oklahoma! This year, BCT concluded an unexpectedly successful run of Urinetown. Producer Bonnie Erickson says, “The name alone didn’t fit our older demographic, but the audience was on its feet!” Before that, Stephen Sondheim’s sophisticated A Little Night Music played to full houses.

Last year’s The Full Monte also was “definitely a risk, but it sold like crazy,” Artistic Director John Command reports. With a bio that includes Broadway performance, choreography for Vegas shows, and a whole lot more, including, locally, more than 40 Chanhassen productions, he has been given carte blanche to choose the season’s lineup and direct them all. (Watch for Candide next year.)

At TRP, play-selection and director-selection committees, composed of TRP members (membership is free and open) establish each season’s lineup. The company’s salaried staff includes Antenucci, an assistant administrator, and a half-time technical volunteer coordinator. All nine directors—a different one for each show, selected from candidates experienced in staging arena, or “in the round” productions—receive a stipend. Many other individuals fill a myriad of tech and acting slots for the pure love of it.

At BCT, Command, the executive director, and the technical director are salaried, while Executive Producer Erickson, the sound and light designers, and the stage manager receive stipends. Actors come away with $200 per run, after putting in six weeks of rehearsal time and four weekends of performances.

TRP holds auditions for each show, while BCT hosts a spring audition before casting next season’s offerings. “New talent is welcome,” Command insists. “For Urinetown, we used 10 new people, some from as far away as Wisconsin.”

Spawning Grounds
TRP’s Rolodex includes 2,563 actors who have performed or auditioned there; 362 design and tech people; and 140 directors. Over the years, many have gone on to, or come over from, professional theater, like Jon Cranney (Children’s Theatre, Guthrie), Howard Dallin (Cricket), Gary Gisselman (Chanhassen), Lou Bellamy (Penumbra), Michael Brindisi (Chanhassen), Faye Price (Pillsbury House), and Charles Nolte (actor, playwright, and head of the University of Minnesota’s Theater Department). Sally Wingert and Linda Kelsey first acted here. So did broadcaster Dave Moore and his son, Peter Moore. Even—gulp!—Marilyn Carlson Nelson, back in 1956.

Brindisi, Artistic Director of the very professional Chanhassen Dinner Theatres, got his start in community theater in Albert Lea, then went on to do shows at TRP, BCT, and Chimera in the Twin Cities. And he loved every minute of it.

“If I ever stop doing what I’m doing now, I’d go back,” Brindisi swears. “It’s a rewarding place to work. There’s something really special about working with people that are doing it because they love it. Some of my fondest memories are the shows I’ve directed for those companies. And, as a mentor, it’s also wonderful to see some of those talents rise through the ranks. For instance, Kirsten Rodau, a terrific talent who performed at Chanhassen in Les Miz, came from the Anoka Community Theater, and Karen Weber, another lead, from BCT.”

Esteemed actor/director around town Craig Johnson got his start in community productions, too: ”I auditioned for TRP while I was an undergrad in Theater at the U. There weren’t a lot of places where young actors could get experience. After a number of years, once they knew me, I started directing. It’s a great springboard, a way actors starting out can get seen, or for those new to town to pick up local credits, make contacts—a showcase.”

Johnson also has written script adaptations for TRP, and taught directing classes there, proving, “You can go from one thing to the next, and the next.” He’s directing TRP’s Henry V this season, as well as staging and appearing in works for several professional companies. People such as he help others make the climb, too. He points to Mo Perry, whom he cast at TRP in Ibsen’s Ghosts: “Since then, she’s worked constantly,” he affirms.

According to Jack Reuler, founder and Artistic Director of Mixed Blood, community theater is no longer the stepchild—or stepping-stone, either—it once may have been: “People work in both sectors, except when an Equity house, like the Guthrie, forbids. There used to be a sense that Equity [union membership] was an actor’s aspiration, but now, it’s not the end it once was, either in perception of quality or benefits. There’s a solid talent pool on both sides of the equation. I myself spot talent in college and community productions, as well as in small to huge professional companies. At Bloomington, where I just saw Urinetown, the caliber of production is of the highest professional standard.”

Show Me the Money
Unlike pro groups, which rely in part on grants and corporate funding to bolster ticket revenue, community theaters depend almost entirely on ticket sales to keep the footlights on. BCT, which found a welcome permanent home in 2003 in the Bloomington Center for the Arts, where it shares stage time with other performing groups, pays a portion of ticket sales in lieu of rent. And sales have skyrocketed, Command states. In the 10 years he has been on board, revenues have grown from $4,000 to $1 million.

TRP, which operates on a $300,000 annual budget, owns its own Minneapolis West Bank building, a behemoth that includes costume and set-building shops, a separate rehearsal space, and more. The company also serves as a valuable resource for other troupes, lending props and costumes for a nominal fee from its extensive stock. The service is “part of who we are,” Antenucci declares with his customary gusto.

Audience demographics vary from show to show, Command relates, with more daring scripts like Urinetown drawing a younger crowd than the blue-hairs who turn out for, say, My Fair Lady. TRPers would agree. In line with its community commitment, that group invites nontraditional theater audiences, such as halfway houses, for its preview performances. Both companies offer occasional classes.

For someone like Command, who has been around the block, the payoff he finds in community theater: “The energy! The excitement! So many people involved!” In contrast to some professional companies, where, he has felt, “it’s just a job, here, it happens all by itself. It gives the shows a lift.”