How times have changed! In 1951, when a young Charles Nolte dazzled Broadway in the innocently studly title role of Billy Budd, the show emanated homoerotic tensions to rival Brokeback Mountain. Trouble was, unlike Brokeback, it never was acknowledged openly. But, of course, the audience and the actors felt it. 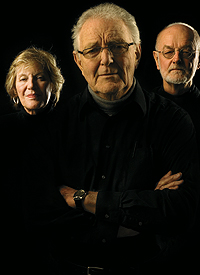 Now, in 2008, in a spectacular contrast, Nolte, at a robust 84, is playing a leading role as an openly gay man in Exit Strategy, a Cricket Production at Mixed Blood Theatre. This new play, penned by Roy M. Close and Bill Semans, involves two senior citizens on fixed incomes about to lose their residence to demolition.

Nolte enthuses, “At long last, a play of hope and optimism that there is still life and time, and you can do what you will! You’re at the exit, of course. Now, the strategy is how to deal with that inevitability.”

In contrasting the Billy Budd era with the Exit Strategy era, Nolte is struck by how far things have come.

Nolte recalls, “Not one of the reviewers, and there were dozens in those days, mention the fact, of course, that Claggart has the hots for Billy Budd, and so did Captain Vere. But what is so fascinating is the fact that you could not discuss it, although everybody knew it. But they had to find ways of obfuscating the basic facts. Making end runs around. Using similes and metaphors. The whole canon of Billy Budd is replete with people trying to avoid saying what is perfectly obvious.”

Continuing, Nolte observes, “It seems like there’s been a tectonic shift. People are now able to discuss what they were never able to say obviously in the past. There’s a very poignant line in Exit Strategy where James, who is in his 80s, reflects back on his own inability to discuss any of this with his father. That is really one of the great tragedies of my generation. In fact, I could never discuss any of that with my father, and I’m sure he must have known subliminally. But not to be able to talk about something as paramount in one’s life seems sad in retrospect.”

When asked about Mae’s reaction to James’s gayness, Venard muses, “He’s been there [at the residence] for six years, so he’s not available to her. He’s gay, and refers to it a lot, and shares a lot of that gayness with her. I don’t think she sees him as anything but James.”

Venard and Nolte both add that tolerance is something tending to happen when you reach the twilight years.

Nolte directed Venard in Oedipus Rex at Michigan’s Meadow Brook Theater, where his life partner, Terry Kilbourne, was artistic director. They also performed together in University of Minnesota Alumni showcases.

Venard says of their rehearsal process, “The only thing that’s hard for us is that we have to get mad and mean at each other, and Charles will turn to me, and say, ‘I don’t like being so mean to you.’ And I’ll say, ‘I know you don’t really mean it.’ He’s a prince!”

All artists involved in the production, including the director, Howard Dallin, 72, are forthright about their age. Even the publicity materials tout that. Dallin also directed Cloris Leachman in her beguiling portrayal Grandma Moses: An American Primitive, which itself spans a century of life.

Nolte appreciates that “the whole aging process itself is discussed—sometimes in minute detail. Prostate cancer. Dialysis. The process of running down, and getting old. And the flirtation with, then into all this, with illegality! You’re asked to do something that’s not legal! To me, it’s exhilarating and surprisingly funny, and really quite honest. From my point of view, the playwrights are trying to turn what is essentially a sad conclusion to life in the end station from a grim expectation to a really great expectation.”

This shift in expectations is triggered by a mysterious figure, portrayed by playwright Semans, 71, who offers the two seniors a possibility that you’ll have to find out about when you see the play.

Semans explains that the play “looks at life from a geriatric perspective, and the possibilities and challenges that one can still go after.”

But Semans stresses that this is not On Golden Pond or The Gin Game.

Or, as Nolte puts it, “We needn’t all be condemned to watching reruns of Wheel of Fortune and I Love Lucy. I know that exiting is inevitable. I know that more than anybody. I’m 84! But the strategy is how to deal with your end station.”