On April 25-26, Camp bar in St. Paul is hosting famed Barbra Steisand impersonator Steven Brinberg in his sensational Simply Barbra! The premier Streisand impressionist, Brinberg has performed his incredible show to international acclaim both on stage and television (twice with none other than composer Marvin Hamlisch). It pays homage to all that is Streisand. Brinberg does not lip-synch, but accurately portrays Streisand with his own voice. 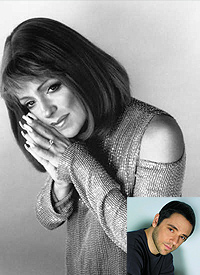 With more than a decade of performing experience, his amazing show has him in demand literally worldwide. Brinberg conceived Simply Barbra! in 1993 at Don’t Tell Mama in New York City, where it continues to run when he is not touring. The ever-changing production has been seen in many cities both in the United States and around the world.The live CD and video of Simply Barbra currently are available, as well as a second CD, Simply Barbra Duets.Hamlisch enthuses, “When you first hear Steven’s Simply Barbra CD, for the first brief moment, you almost think, ‘My God! Is that really her [Streisand]?’ It’s so captivating! Not only does he have a wonderful take on her—not at all mean-spirited—and this ability to imitate her, he also captures a lot of moments and nuances that are terrific. It was very impressive.”

In an interview with Peter Haas in the January 2000 issue of Cabaret Scene, Brinberg remarked, “Today, there are only a handful of us who are live vocalists: Tommy Femia, who does Judy Garland [he recently appeared at Camp]; James Beaman, who does Marlene Dietrich and Lauren Bacall; and Richard Skipper, who does Carol Channing. We’re actors. It’s unfortunate if someone stays away from my show because they think it will be some silly drag show. One reviewer I had said, ‘Gender, schmender, it’s entertainment!’ Sian Phillips, the British actress who has played Marlene, called it a ‘female interpretation.’ Charles Busch called it ‘gender illusionist.’ I always say, ‘I don’t care what you call me; just call me!’’’For more information, visit www.simplybarbra.com.