There has been some “discussion” lately among food writers about who gets to the newest places the fastest, who puts the first reviews out with roadrunner quickness, and who attends the most openings around town. All that’s important, of course, but I dare say other things are equally important. 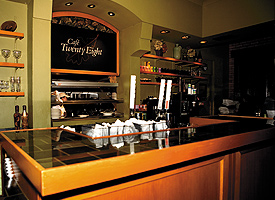 I’ll readily admit that I haven’t spent much time working in the food industry. I didn’t put in grueling years waiting tables or sweating hour after hour over a hot stove. But what I do know is good food from a diner’s perspective, and isn’t that what it all truly boils down to?

What I want to know when I read another food writer’s column is where he takes Uncle Jay when he comes to town, and where he goes to impress a date. That’s what I often try to provide for the readers of my column. It’s also, in my opinion, crucial to keep local money local by supporting privately owned restaurants when possible. No feeling is better than finding a great restaurant with a fabulous chef, affordable food, and a conscientious independent owner.

That said, one of my first recommendations to my own friends and family is Café Twenty Eight. No big scoop here. It has been around for a few years now. No grand opening hoopla to talk about, and no need for chef name-dropping. Just outstanding food, and a wonderful atmosphere in which to enjoy it.

Tucked in the heart of Linden Hills in Minneapolis, Café Twenty Eight has a neighborhood feel, and it should. Owner Linda Haug told me that she was living in Linden Hills when the space became available. She decided she wanted to open a “neighborhood place with good, affordable food.”

Though it wasn’t how the restaurant started out—Haug is quick to say she doesn’t want to sound like she’s “jumping on any bandwagon”—much of the food now is purchased from local farmers. The menu reads like a list of family friends from around the state: Larry Schultz’s chicken, Tim Fischer’s pork, and Thousand Hills Grass Fed Steaks—plus a cold pint of local brew Surly to go with it.

Chef Tatum Barile turns Schultz’s organic chicken breasts into a savory, mouthwatering delight when roasted, and nestled in a bed of leek and cauliflower puree ($17). Topped with a warm fennel, orange, and celery salad, and drizzled with cranberry oil, it is a painter’s palette of color and a celebration of flavors. 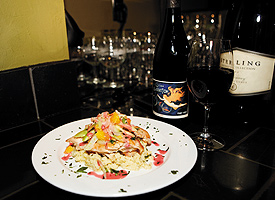 Also on the team is Maria Gonzalez, who works her magic on Fischer Farm’s naturally raised meat for Pork in Adobo ($15). Using time-consuming traditional methods for Adobo preparation, she creates her three-chili sauce, from gaujillo, ancho, and puya chilis, resulting in a smoky, spicy, full-flavored entrée that is outrageously well-prepared and spirited. Served with fresh pico de gallo, and a black bean and corn salsa, this dish has become a favorite for regulars, and it’s no question why.

Before trying the Pork in Adobo, my favorite dish at Café Twenty Eight was the Gruyere and Carmelized Onion Quiche ($9). This melt-in-your-mouth masterpiece with a small Champagne pear salad on the side will remain in my good graces, but may have to move to being my favorite lunch now.

I also sampled the Oven Crisp Pizza, topped with goat cheese, organic chicken sausage, and roasted grapes. The combination of flavors worked surprisingly well, though I didn’t find it as impressive as the rest of the menu.

The Beet Salad with Goat Cheese Vinaigrette ($10) also deserves a mention, as even the half-salad is a huge plate of fresh roasted beets, leeks, and walnuts. Just delish! I’ve eaten the half-salad as a meal, which leaves room for the Minnesota Apple Crisp with Sebastian Joe’s Ice Cream.

I would be negligent to tout Café Twenty Eight’s attributes without mentioning the beer list, which is one of the best in the Twin Cities. The selection of Trappist ales and other Belgian beers is notable, with everything from Triple Karmelite to Lindeman’s Framboise, which almost could serve as dessert. Of course, a selection of Surly beers is always on tap.

For the true-blue local beer set, watch the Web site for some upcoming dinners with beer pairings, and, very soon, the release of this year’s Surly Anniversary Beer, Two. For those who tend toward slightly more lowbrow beer enjoyment, PBR in a can is recommended especially for Friday nights, which feature a Wisconsin-style Fish Fry. (Haug is from Wisconsin.)

Without unnecessary pomp and ceremony, Café Twenty Eight continues to do things right. The servers are professional and friendly, the food speaks for itself, and the beer and wine lists are impressive and affordable. I pretty much can guarantee that once you visit, you’ll go again.