Last summer, when I heard a neighborhood pub was coming to South Minneapolis that would have an unbelievable beer selection, I almost couldn’t contain my excitement. I mean, some Minneapolis pubs have good beer offerings, but nothing like the ones at a few of my favorite St. Paul spots. Since then, I’ve been to Buster’s on 28th no less than 20 times, although some visits leave me scratching my head. It indeed has a fantastic beer list that would leave the average Miller Lite drinker’s head spinning in confusion, but for the local beer connoisseur, this new venue is the place to go. 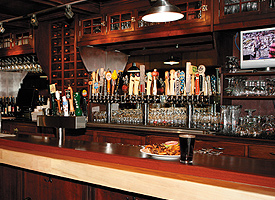 Buster’s usually gets at least one keg of each release that comes out of Surly Brewing Company in Brooklyn Center. I found the newest, Surly Mild, easy to drink, yet still hoppy and flavorful.

I easily could take up my entire column with the beer at Buster’s, because 28 varieties are on tap, running the gamut: Ommegang Chocolate Indulgence Stout out of New York; a variety of Bell’s out of Michigan; and a few more local brews like Schell’s Snowstorm and Flat Earth Belgian Style Pale Ale.

Besides the wonderful selection of brews, the menu is more varied and complex than the usual neighborhood burger joint. At this point, I wish I could proceed by telling you how I love the food as much as I do the beer, but instead, here’s where the head-scratching comes in: It seems to me as if the menu attempts to be ambitious in some areas where something simple would suffice.

For instance, Buster’s does some things very well. The Buster Burger ($9) is a very good, juicy, and solid half-pound Angus one, served on a fresh bakery bun made right next door at A Baker’s Wife’s Pastry Shop. I add the aged Wisconsin cheddar to mine for added flavor and smoothness. 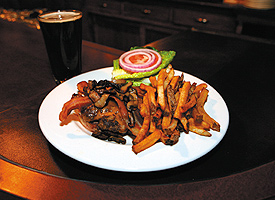 As an alternative, Buster’s offers its Veggie Burger ($7). A scrumptious homemade veggie burger is not easy to find. It could be very simple yet fabulous, because vegetarians who want to enjoy the pub atmosphere and partake of pub food would be all over a straightforward, nonmeat “burger.” Buster’s version sounds great on paper, claiming it’s full of cassava, black beans, wild rice, sunflower seeds, etc. I was thrilled to place my order, but then disappointed when I found that mine was textural mush, with large chunks of cassava to contend with in every bite. I really wanted to find a homemade veggie burger in South Minneapolis to love, but after trying Buster’s, my affections are still on hold.

Thinking perhaps I should stick to things beer-related, I sampled the Beer Battered Fish ’N’ Chips ($11). I was correct. Though it’s a bit of a grease fest, the batter is tasty, and the cod light and mild. The caper tartar sauce that comes with it is a lovely sapid addition.

Working my way through the menu backward, I invited some friends to meet me at Buster’s for Happy Hour. Ordering for the table, we selected Fire Chicken Wings ($8), which we found to be on the mild side of spicy, and slightly small with little meat— another head-scratching inconsistency, as chicken wings should be an easy “win.” But the Onion Rings ($6), made with Summit, and served with a spicy mustard sauce, were one of our favorites. Moving on through our appetizer binge, we enjoyed the basket of tortilla chips ($3), opting for the add-ons of black bean dip ($3) and chipotle cream cheese ($2). These were a resounding hit, and the dips flew off of our table in a record-setting pace. 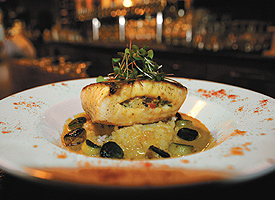 It’s not all about the nightlife, either, as Buster’s recently added brunch to the repertoire, and it’s definitely a win. The B.E.L.T ($8) is a down-home fried egg sandwich served on nine-grain bread with bacon, lettuce, and tomato. It’s served with diced breakfast potatoes that were crispy and satiating. This breakfast hits the spot. Another item is baked French toast ($8) served with fresh fruit. Mine had blueberries mixed into the batter. The result was sweet and decadent.

Basically, if you’re looking for a tasty casual brunch, or a regular happy hour spot in South Minneapolis where you can order a beer you may not be able to get elsewhere, Buster’s is your place. Personally, I really like the pub, but I want to love everything about it, and I’m just not there yet. Thing is, it’s still the new kid on the block, so I’m going to give it some more time. If you wanted to bet a beer on it, I’d wager that with a little more time, I’ll be head over heels.