Who’s That Old Guy On the Cover?

Bob Jansen is certain that will be the reaction to his cover photo. The truth is, anyone involved in Northland politics, the Duluth-Superior gay-lesbian-bisexual-transgender-allied-queer-intersex (GLBTAQI) community, bar ownership, or the Duluth-Superior Pride Committee is well-acquainted with longtime, well-meaning, rabble-rouser Robert John Jansen. 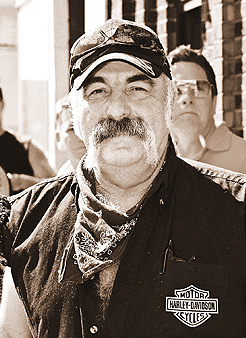 In fact, Jansen has become something of a legend in his own time. At the April 17 screening of the documentary on his life and The Main Club history, Duluth Mayor Don Ness declared Bob Jansen Day, the first-ever local honor of its kind for a gay person.

Jansen taught theater at the College of St. Scholastica, a Catholic institution, until he was fired for being gay. He sued the college in 1982, and won.

Using the small amount of funds he had left, Jansen opened The Main Club bar in 1983. Every year since then, in November, he has hosted, the Blue Moon Ball, a customer-appreciation extravaganza. Community members turn out in gowns and tuxedos, leather and fetish, and everything in-between. It is a true testament to Jansen’s commitment to self-expression.

Jansen quips, “Only once in a blue moon does the Catholic Church sponsor a gay ball.”

After he came to grips with his own gay identity as a young man, Jansen developed a strong passion for community organizing. He has been a poster child, educator, and leader in efforts for gay rights.

The Main Club, now in its 27th year, is a materialization of Jansen’s work. Unfortunately, he has decided to list the bar for sale after this year’s Duluth-Superior Pride, because of difficult financial times.

Next year marks the 25th anniversary of Duluth-Superior Pride. The first several events were picnics in local parks and gatherings in the bar.

Jansen has been involved since its inception, but refused to head up the Pride Committee, believing the community should join together on those efforts. He currently is a board member. He is an invaluable wealth of history and experience for Pride organizers.

This year, as he does every year, Jansen says, “I am trying to phase myself out.”

Jansen explains that he has been politically active for so long, he has become a part of the establishment, and “it is increasingly difficult to attack it. That is why we need the youth organizers to do the attacking—like the Sisters of Perpetual Indulgence.”

It is always a challenge to facilitate youth involvement in Pride. Social media outlets such as Facebook have helped young people connect with each other, but not on the grassroots-organizing front. Jansen believes that queer youth still are feeling alone, and scared to speak out, so venues such as the Pride Committee would help bolster their confidence.

The theme this year is “Do Ask, Do Tell,” another brainchild of Jansen’s. The Pride Committee is seeking military involvement in the Pride Parade, as well as looking for past and present military personnel to tell their stories during the keynote presentation at the Pride festival.

Jansen affectionately refers to 2010 as the “The Year of the Lesbian,” because the headline entertainment at the festival, Uh Huh Her, is a lesbian band, and, in his words, the Pride Committee is “trying for more emphasis on women’s things this year.”

Roth concludes, “The relevance and the history of trailblazing establishments like the Main risk being forgotten, as GLBT groups celebrate greater social acceptance, and gay spaces are no longer clearly defined.”

And Jansen reiterates the sentiments of renowned local gay historian Jean-Nickolaus Tretter: “The more we feel secure, the more we have to be afraid of that security.”

Jansen never throws anything away. He believes that, especially in this age of technology, people are forgetting about the importance of saving and archiving items that document gay history. He keeps letters, buttons and other memorabilia from past Pride celebrations, photos, newspaper articles, other printed materials, and the list goes on.

According to Jansen, “One thing that makes us different is our sexuality—whom we love, and how we love each other. If we keep hiding that, then we keep hiding ourselves.”

But Jansen insists, “It is our space.”

Recently, Jansen made himself “board-free,” because of an increased focus on trying to make his business work. However, his past involvement is unparalleled.

What will Jansen do when The Main Club sells?

The longtime bar owner hopes that someone will invest in the club, and invite him to stay on, and manage it.

As Jansen queries, “Who is going to hire a 60-something queen?”

Jansen’s creative spirit is generating other ideas for a post-Main Club life. He might rent himself out as a traveling lecturer on small-town gay issues, develop gay-history curricula, open a B&B (Breakfast and Bondage), or sell his homemade leather items online. It just depends on how things go.

Whatever he does, don’t forget Jansen. He has changed the fabric of our community in far-reaching and meaningful ways. He deserves our respect and gratitude.

Now you know why “that old guy” is on the cover.