You probably don’t know her, but then—you do know her. Marjorie Johnson, from Robbinsdale, Minnesota—all 4’8” of her—has appeared on The Rosie O’Donnell Show and The Wayne Brady Show. She has offered her award-winning Ginger Snaps to Helen Merrin and Nicole Kidman on the red carpet. Now, Marjorie is the correspondent for The Tonight Show with Jay Leno. She nicely presents her home-baked cookies to NBA players during their finals, and to juveniles competing at the X Games (she was suited up and put on a skate board). During a food fight with Terry Bradshaw, Leno shielded her. Not a bad retirement plan. 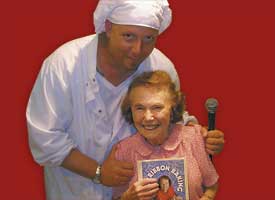 Marjorie is one of my much-loved friends. We have fun gabbing on the telephone for hours—literally. This girl can talk. When I’m out of the country, she e-mails me the longest ones I have ever received, and she sends them at 2 in the morning. Just like Martha Stewart, Marjorie doesn’t need a great deal of sleep. She’s a powerhouse of gab, talent, laughter, and incredible baking sense.

I had not experienced the Minnesota State Fair rightly until I walked the hallowed grounds of the Creative Activities Building with Marjorie. One quiet morning at the fair, we examined the winning breads, cakes, pies, and cookie together.

Pointing to a loaf of white bread, Marjorie asked me if I could see the tiny air cells, and how perfectly they had baked to the same size—no irregular air cells, but all uniform. I understood this tip. My grandmother, Thelma Anderson, had taught it to me back on the farm in Grand Forks, North Dakota. Now, my morning with Marjorie was bringing back splendid memories of cooking with my grandmother on the farm.

As Marjorie pointed to another loaf of bread that had irregular air cells distributed throughout the bread, she was disappointed. Not enough rising time was the issue. A couple rises of the dough works best, as well as not rushing the process. I remember my grandmother telling me that. Sometimes, she would place a bowl with rising dough in the cold garage overnight so the rise was long and slow. “A better taste and density” is what Grandma Thelma promised. Marjorie agreed, and we moved on.

Marjorie is the darling of the Minnesota State Fair. She is ageless (and she will not tell you her age—just ask O’Donnell, whom Marjorie dissed on The View when asked her age), as she runs from interview to interview, wowing everyone, and still taking time to pose for photos, sign autographs, and listen to stories of baking.

One day, I took Marjorie and her ever-patient husband, Lee, to lunch. To my amazement, they never had eaten on the Minnesota State Fairgrounds. Never! Marjorie is a gal from the Depression days. She prepared the day’s lunch, snacks, and supper for her family before they would leave for a day at the fair. The family ate in the car that sat in the parking lot. I was amazed by this revelation, but that’s Marjorie—economical.

After one of my personal appearances at the fair, Marjorie, Lee, and I walked to the Hamline Diner. It’s my favorite place to eat on the Fairgrounds. Several fair-goers stopped us to ask if I would take their photo with Marjorie—“The Leno Lady.” I was wearing my chef’s coat and newly won Food Network medal. No one wanted my photo. I loved it. Marjorie posed and smiled. She was the center of everyone’s attention.

Marjorie completed her most difficult endeavor this year. She wrote a cookbook titled Blue Ribbon Baking with Marjorie. Since its release at the beginning of October, she has appeared at book signings all over the Twin Cities. She arrived at the Mall of America to a crowd of more than 800 people waiting patiently in line to see her.

The Mayor of Robbinsdale declared April 30, 2007, Marjorie Johnson Day. I canceled everything on my calendar, and drove to the Robbinsdale City Hall. An amazing collection of well-wishets, from around the Twin Cities arrived. Hundreds of senior citizens were there. Marjorie was their new idol. She was the hope of starting a new career at an age when everyone is retired.

Check out Marjorie’s fantastic cookbook. The history of this woman will delight you. You’ll enjoy the stories, the photos, and her recipes.

Then, live by one of Marjorie’s favorite statements: “There are two things that I love to do. The first is to bake. The second is to talk.”

For an autographed copy of Blue Ribbon Baking with Marjorie, go to <www.blueribbonbaking.com>.