Bitch Is Back! Popular Entertainer Returns to Pi

after Pi opened in 2007, Bitch caused a sensation when she made her first Minneapolis appearance there on March 26. Now, a year later, on April 13, she’s returning to Pi with her new band, The Exciting Conclusion, as part of a national tour. The openers for the evening are The Pussy Pirates. 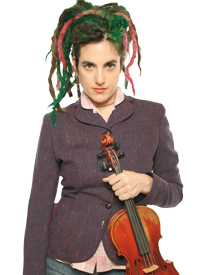 At the Pi performance, Bitch will be promoting her new solo debut, Make This/Break This. She also is launching her own label, Short Story Records.

A musician who plays electric violin, bass, and ukelele, Bitch is an actress and writer as well. Her songs “Stone” and “Unstick” have aired on The L Word. She appeared as herself in Shortbus, the acclaimed film directed by John Cameron Mitchell (Hedwig and the Angry Inch). She released three albums with her former band, Bitch and Animal.

Bitch recently produced Boulder, a new album featuring legendary singer Ferron, which will be available in stores in June. Bitch will be touring with Ferron throughout the late spring and summer, with both collaborating at the Michigan Womyn’s Music Festival in August.