Beyond Lefse: Sven Sundgaard Reprises Dining Out for Life

Amid rising HIV/AIDS statistics locally, the 14th annual Dining Out for Life on April 24 offers a glimpse of hope. The event is the main fund-raiser for The Aliveness Project—a Minneapolis-based organization that provides services and resources for persons living with HIV/AIDS—which has seen a rise in its facility’s usage. It documented more than 1,400 people living with HIV/AIDS (that number represents a fourth of those living with HIV/AIDS in Minnesota) who used at least one of its services last year, an increase of a little more than 8 percent from the year before. 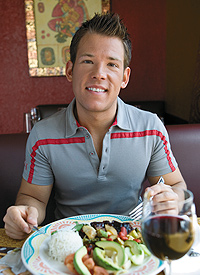 Tim Marburger, The Aliveness Project’s Director of Fund-raising and Special Events, says of Dining Out for Life, “It’s a really easy way for people to participate—not only the restaurants, but the diners also. You just go in, and you eat. Everybody loves to eat. Then, a percentage is given back to The Aliveness Project. It’s as simple as that.”

More than 130 restaurants from across the state have pledged anywhere from 15 to 100 percent of their receipts April 24 to The Aliveness Project. When Marburger began volunteering with the organization six years ago, only 40 restaurants participated.

“The restaurants have always jumped on board,” Marburger notes. “I know a lot of people who look forward to this event each year, because it is an easy way to get involved. The community really steps up, so it’s quite the night—or quite the day, actually.”

According to Marburger, ambassadors for this year still are needed. Those interested need to attend a one-hour training session, and then spend about three to four hours at the restaurant the day of the event.

As Marburger explains, “The role of the ambassador is incredibly important. It’s a fun way to get involved, yet not necessarily have it ongoing. A lot of people are real busy, and say, ‘Oh, I’d like to do something, but I don’t have lots of time.’ Well, this is the perfect way to do it.”

KARE 11 meteorologist Sven Sundgaard, who served as the event’s poster boy and Lavender cover celeb last year, is back this year in both roles.

Sundgaard states, “There are a lot of organizations of a similar nature that are big, national, or worldwide things, but it appealed to me that this is an organization doing something locally, because you can’t really help out the rest of the world until you help your own. Going out to eat is the simplest thing you can do, so you might as well do something you are already going to do, and have it benefit an organization. No excuses.”

As for the weather, Sundgaard shares that the average high for April 24 is 61, and, in his words, “judging by how this spring is going, let’s just hope for average.”

“If Sven gives me a blessing of wonderful weather, that would be perfect,” Marburger remarks with a laugh. “We have been fortunate that out of six years, the weather has been comfortable to really nice, but I always get a little nervous, just because I want it to be a success. I see the wonderful work that the social workers do here at The Aliveness Project. I see the work that the kitchen staff put into their meals, and making life better for people living with HIV/AIDS. I realize that I have a part in keeping this work going.”

A little nervous might be an understatement, as everyone at The Aliveness Project knows just how important Dining Out for Life is. More than 22,000 people dined out during last year’s event, bringing in $112,000 (up from $30,000 just six years ago). That money helps to cover about two-and-a-half months’ worth of work at the organization. Roughly one-sixth of its funds come from this single day.

Marburger points out, “It brings in a nice bit of money, which helps us do the work, like bringing in and giving out 41 tons of food last year, serving 31,000 meals, and providing more than 3,000 acupuncture shiatsu therapies. Without this, we’d have to really be hitting the bushes all the time to try to find the money. So, the money is definitely needed.”

As Marburger enthuses about The Aliveness Project, “It’s just a fantastic place that does a great service for those living with HIV/AIDS and their families. If The Aliveness Project wasn’t here, there’d be a lot of people who would be in dire straits, and I think just not doing as well as they are doing.”