Barbecue on Ice: The Best Way To Celebrate Winter’s End Is To Tailgate

Grill basket? Check. Picnic tables? Check. Plastic forks, plastic knives, and plastic spoons? Check, check, and check. You officially are ready for your outdoor barbecue—you’ve got everything you need. Oh. Well. Almost. You’ve got almost everything you need. You’ll have to find a refrigerator big enough to store the potato salad safely, of course. You also will need to dig out your Sunday-go-to-meetin’ pair of snowmobile boots…at least, if you’re going to indulge in the chest-hair-sprouting practice of—wait for it!—winter barbecuing. 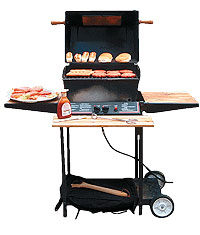 Yeah, you read that right­—just because your breath floats in the air like a comic-book word balloon when you trudge through your snow-choked sidewalk is no reason to keep your cooking duties confined to the indoors. Yes! You can plan one for this weekend!

The first major difference between a summer barbecue and a winter barbecue is the hours of operation. Summer barbecues traditionally begin in the midafternoon, and stretch into the early evening, but the latter tends to be a relatively early affair, even in the weeks of late winter. Consider making your winter barbecue into a lunch affair, and hope your neighbors weren’t drinking the night before.

As with more traditional outings, a debate rages regarding the merits of gas versus charcoal grills. Charcoal grills generally are considered more authentic, regardless of the season, and the high flames that precede the actual cooking serve as a vital hand-warming tool.

That said, Lavender Magazine hereby grants anyone who cooks in subfreezing temperatures a free pass, whether they’re employing the most macho of gas grills, an open fire pit, or an Easy Bake Oven.

The physical place is no small consideration. Obviously, the number of guests is the most important determining factor, but don’t forget the entertainment—a highly interpretive term during Minnesota’s longest season. Such traditional favorites as badminton and lawn polo are prohibited by the lack of an actual lawn.

But football is definitely doable. As the lesbians reading this piece know, snow catalyzes football’s butch factor by the power of 10. This game presents its own problems, as it demands a large amount of space, and the only people likely to have backyards big enough to accommodate such a contest either own their own sports team or have University of Minnesota business schools named after them.

If this reality forces you to employ a public park for your winter barbecue, be aware of the other patrons—if they see you cooking outdoors in winter, you well might find yourself pursued by white-coated professionals wielding butterfly nets, and end up sharing a hospital room with someone who insists that he’s the Emperor of France.

When you get around to the actual eating part, doing so quickly is highly recommended in order to prevent excessive cooling…of the eater or the eatee.

Oh, and where to keep the potato salad? You needn’t fret—the perfect refrigerator is all around you.